Inspired by the French classic of baby leek and potato soup, this soup, with a hint of bacon, is always a hit with guests at the restaurant and at home. It works well as either a starter or a main course.–Michel Deville and Brendan O’Farrell

Leek and Potato Soup with Bacon 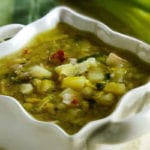 Inspired by the French classic of baby leek and potato soup, this soup, with a hint of bacon, is always a hit with guests at the restaurant and at home. It works well as either a starter or a main course.
Michel Deville and Brendan O’Farrell
Prep 35 mins
Cook 25 mins
Total 1 hr
Entrees
American
6 servings
314 kcal
5 from 1 vote
Print Recipe 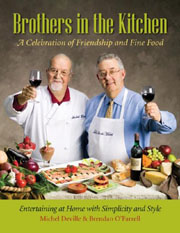 If used as a starter, it makes a nice prelude to a main course with full flavors, such as a red meat or game dish.

I made only one notation on this recipe as I tested it. That was that in the future I’d fry the bacon in the large saucepan and just wipe it out with a paper towel to continue with the soup. No need to dirty a sauté pan. We found this soup to be just what the author indicated, a nice variation on the classic. Leeks and potatoes, what could be better? Some lovely smoky bacon and a dollop of crème fraîche, that’s what. Warm, rich, and comforting, it was a perfect simple lunch on a recent frigid New England afternoon.

No wonder this is a hit at their restaurant. It’s full of the smoky flavor the bacon imparts, and I was surprised by it. We served it with rack of lamb, and, as much as I love lamb, I was drawn to the comfort of this soup. Quick, quick, quick. I would make this again and again. It’s right on with the leeks and potatoes. I don’t think it needed the sour cream, it was perfect without it.

This was a simple, fast, and tasty soup. Everyone really liked it. I actually made two batches, one where I followed the recipe exactly, and the other where I left the skins on the potatoes. Not surprisingly, everyone predicted correctly which version they would prefer. This is a great winter soup that I will make again.

I made this soup last night but with a slight twist. I followed the instructions to a T, but instead of adding all the crisp bacon along with the potatoes, I added just 1/3 of it. Once the soup was fully cooked, I puréed it in the blender to create a nice smooth soup, similar to a classic vichyssoise. I then served it chilled with the remaining bacon crumbled on the top, which gave the soup a nice contrast of crunchiness along with the smoothness. Everyone absolutely loved the soup, and we still have enough to enjoy some more today. A perfect twist to this recipe for a hot summer day.