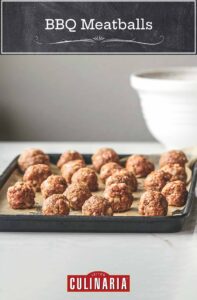 These BBQ meatballs are tossed in the slow cooker or oven (translation: no stovetop spattering to clean up) and slathered in a homemade molasses barbecue sauce. Here’s how to make them.

Meatballs are the quintessential party food and the variations are endless. They were considered important elements of a black caterer’s special-occasion repertoire as far back as the late nineteenth century.

And, as African cooking experienced a renaissance in the late 1970s, authors like Dinah Ayensu reminded revelers that the dish (seasoned ground meat bound with bread and milk) is pure North African fare—known as kofta. After trying all of these and so many more, I present the classic mix of ground beef and pork, rolled into balls and baked in barbecue sauce, typifying party perfection.–Toni Tipton-Martin

These easy bbq meatballs have quickly become a weeknight and potluck staple among our testers. They love that they can be made in the oven for a simple dinner, or kept warm in the slow cooker at parties. Above all, the testers adore the bbq sauce that coats these baked meatballs.

Can I make these BBQ meatballs ahead of time?

If you’re cooking them the same day, prepare the meatballs and place on the baking sheets. Cover with plastic and stash them in the refrigerator until you’re ready to cook.

How should I serve these meatballs?

These little meatballs are a perfect appetizer on their own, or you could plop them into your slow cooker and take along to a potluck.

If you’re serving these at home for dinner, they’re great on their own with some steamed or roasted vegetables on the side. Or pile several of them into sub rolls for a sweet and tangy riff on meatball sandwiches.

If you’re serving them at a potluck or party, use the slow cooker bbq meatballs variation and offer decorative toothpicks alongside for spearing, or make sliders with a meatball and Hawaiian roll or slider bunThese little meatballs are a perfect appetizer on their own, or you could plop them into your slow cooker and take along to a potluck.

Can I freeze these meatballs?

You can freeze the meatballs raw or cooked. Either way, freeze them on the baking sheets to prevent them from sticking together, and once frozen, transfer them to a resealable bag and store them in the freezer for up to 3 months. When baking or reheating frozen meatballs, your cooking time will increase. 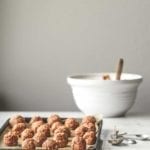 These BBQ meatballs are tossed in the crockpot or oven (translation: no stovetop spattering to clean up) and slathered in a homemade molasses barbecue sauce. Here’s how to make them.
Prep 30 mins
Cook 40 mins
Total 1 hr 10 mins
Mains
American
4 servings
602 kcal
4.75 / 4 votes
Print Recipe 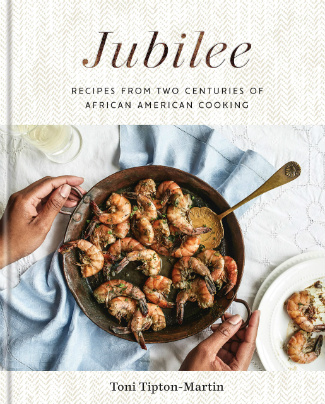 For the molasses barbecue sauce

I took these oven bbq meatballs to an office potluck and they were a hit. The BBQ sauce will probably be my new go-to sauce. Tangy, not overly sweet, doesn’t take too long, and a reasonable number of ingredients, all of which I keep on hand anyway.

The homemade meatballs were delicious and stayed moist. Overall a really great, easy dish to take to a party, especially since most things can be done in advance. Then just throw them in the oven before needed.

A flavor explosion for your mouth. Barbecued perfection personified. These little balls of meat dripping in that rich, lush, slightly sweet, slightly smoky sauce pack a punch of spicy, tangy, smoky delight in every bite.

These Crock Pot bbq meatballs were very little work as the flavors further developed while simmering in the sauce, which I assembled earlier in the day. The spice level was fine for me but some might like it dialed down a bit and, in that case, I would add less cayenne or omit it altogether.

The rendered 42 one-inch meatballs that easily served 4. The meatballs recipe could be stretched to serve 8, I suppose, if you served these on a tray, butler style, with little toothpicks. But who wants to do that? LOL. I seriously just ate these right out of the pot and sopped up the extra sauce with a Royal Hawaiian roll.

The meatballs didn’t need additional salt. I just scooped the meatballs out with a slotted spoon and put them directly into the Insta-Pot Duo with the sauce on slow cooker setting for 3 hours, which allowed for that sweet caramelized taste, the very definition of BBQ sauce, to further develop with the spices.

Standing there eating them with the roll, I was wondering what would this taste like with some fresh pineapple and red and green peppers and onions added? Couldn’t tell you because at that point my husband came home and saw that “look” in my eyes, like he better get in on some of this before I eat it all. We thoroughly enjoyed every bit of it and polished it all off like greedy hyenas.

These meatballs are quick to make since there are few ingredients and the onion isn’t cooked first. Nice and tender.

Not much else to say about them because the star of this show is that dang barbecue sauce! It looks like a lot of ingredients, but it really isn’t since many are spices. I thought it would have more of a molasses taste; however, it turned out to be the right amount of sweet, tangy, and spicy and that makes it a real winner. Try the barbecue sauce on chicken, ribs, or pulled pork. They’d be happy to sport this sauce.

If I were to make the meatballs again, I would saute the onions before adding them to the meat. I do agree to always cook some of the meat to taste for seasoning. The meatballs definitely needed additional salt. You can use your favorite meatball recipe using this sauce.

Meatballs with barbecue sauce sounds straightforward but not in this particular combination. They were delicate in texture but powerful in flavor. The heat and sweet in the barbeque sauce were exceptional.

I pulsed a rustic loaf without crusts for coarse bread crumbs because I didn’t have panko in the pantry. While the meatballs roasted in the oven, the long list of spices, water, and ketchup blended together in just 20 minutes. I served 4 meatballs in potato sandwich rolls.

Next time, I would double the recipe of both the meatballs and the sauce and serve a quick pickle of cucumber and carrot. A truly flavorful dinner that came together in just under an hour!

If I wanted to serve bite-sized meatballs to a crowd on a buffet, I probably try the onions in a food processor for a more even mince and use panko.

I’ll get the bad news out of the way first—these oven bbq meatballs alone are unremarkable. They are quick to throw together but a bit on the tough side. When you fry up a little to test for seasoning, you’re going to wonder where the garlic, smoked paprika, and pepper went. The flavors meld and develop after they bake, but odds are you’ve had better. Odds are I’m also being a little overly critical.

However, this barbecue sauce makes up for every shortcoming you could find with the meatballs, and then some. It is to barbecue sauce what Norman Rockwell’s “Freedom of Want” is to Thanksgiving: it sets the expectation, and sets it VERY high. The molasses plays into my nostalgia for the barbecue sauces I ate as a kid, but the cayenne and chili powder really pack a punch. I’m so glad to have a cup of it leftover because I plan to use it on everything. Next time, I’d make a double batch of sauce just to eat on other things. Disclaimer: I did end up simmering the sauce longer to get the consistency I wanted.

I ended up with 30 tablespoon-sized meatballs, which were the perfect size for dinner. We scooped them from the baking dish, making sure not to miss the caramelized sauce around the rim. If you wanted to serve these for a cocktail hour, I would certainly recommend making them smaller (maybe 1 1/2 to 2 teaspoons) since they would make for an awkward bite the size they are.

I added an extra 3/4 tsp of Diamond Crystal Kosher salt to the initial meatball mix after tasting, but people who use other salts will probably be fine with the amount provided. The meatballs are actually probably best slightly under seasoned so they don’t compete with the sauce, since the two combined are outstanding. Everyone who ate these asked for the recipe.