My mother’s chicken and potatoes, from Lidia Bastianich, is a true family favorite for more than three generations now. The combination of juicy chicken, roast potatoes, salty bacon, and tangy pickled peppers will please everyone.

In my family, favorite dishes are always being altered according to what is available and what is best — especially when I’m cooking. Growing up, my brother and I demanded this every week; our kids, Tanya and Joe and Eric, Paul and Estelle, clamored for it too. And now the next generation of little ones are asking their great-grandmother to make chicken and potatoes for them. 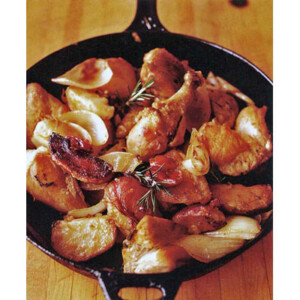 Chicken and potatoes, fried together in a big skillet so they're crisp and moist at the same time, is my mother's specialty. I've added pickled cherry tomatoes and bacon just for an upgrade of my own.
Prep 30 mins
Cook 15 mins
Total 45 mins
Mains
Italian
4 servings
860 kcal
5 / 4 votes
Print Recipe 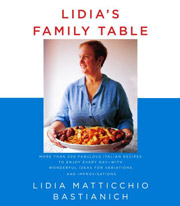