These chiles rellenos, made from poblano chile peppers and cheese, are baked instead of fried. An almost traditional Mexican recipe.

I grew up eating battered and fried chiles rellenos, stuffed mostly with gooey cheese. I still love them, but when I found a rare copy of the out-of-print Los Chiles Rellenos en Mexico by Mexico City’s brilliant Ricardo Muñoz Zurita, I was inspired to think beyond deep-frying and experiment with baked poblano chiles. The baking intensifies the flavor, something deep-frying doesn’t do. Poblanos have a thick, meaty quality and a denser flavor than bell peppers. Occasionally you get one with some heat, but normally they are mild.–Steve Sando and Vanessa Barrington

Don’t mistake these chiles rellenos for potato chips. What we mean by that is just because the chiles are baked, not fried, doesn’t mean they’re not compelling in their own right. They’re really quite lovely. That couldn’t be further from the truth for baked potato chips. Ugh. 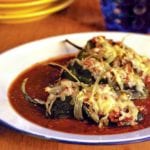 Poblanos have a thick, meaty quality and a denser flavor than bell peppers. Occasionally you get one with some heat, but normally they are mild.
Prep 25 mins
Cook 25 mins
Total 50 mins
Mains
Tex Mex
2 servings
1261 kcal
4.50 / 2 votes
Print Recipe

For the classic red salsa