These red chile pork tamales are the real authentic Mexican deal. And they taste as though they were lovingly crafted by the loveliest abuela imaginable, crafted to be slightly spicy with pulled pork. Here’s how to make them at home, step by step.

Red chile pork tamales that are authentic Mexican through and through—sweet corn masa dough enveloping a richly spiced, knee-wobblingly tender pork filling. Consider yourself warned, though, you’re going to end up with a holy abundance of red chile pork filling, which is actually a godsend seeing as you can put it to lovely use tucked into tacos, plopped atop rice, or simply inhaled by the forkful.–David Leite

We’re not gonna lie. Making this tamale recipe does require some time and effort. However, our testers will happily tell you that they are worth every minute.

Carlin B. is calling them “a plateful of tasty comfort food,” and Sandy O. declared them to be “absolutely wonderful.” Makes you want to try them, doesn’t it?

Tamales are a Mexican dish made with tender masa dough and filling that’s steamed inside a corn husk until tender. They’re popular year-round, but particularly during the Christmas holidays. The masa dough can be filled with pork, beef, chicken, and even vegetarian fillings, as in these sweet potato tamales, are available.

What do you serve with tamales?

The tamales themselves can be topped with mole, sour cream, salsa, a squeeze of lime juice, or cotija cheese. For side dishes, try serving them with refried beans, rice, or Mexican corn.

How do you eat a tamale?

To eat the tamale, remove the corn husk from around the filling. You can either discard the husk or use it as a plate. Eat the masa filling with your fingers or a fork and knife. 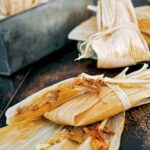 These red chile pork tamales are the real authentic Mexican deal. And they taste as though they were lovingly crafted by the loveliest abuela imaginable, crafted to be slightly spicy with pulled pork. Here’s how to make them at home, step by step.
Prep 1 hr 30 mins
Cook 7 hrs
Total 8 hrs 30 mins
Mains
American
24 tamales
266 kcal
4.93 / 13 votes
Print Recipe 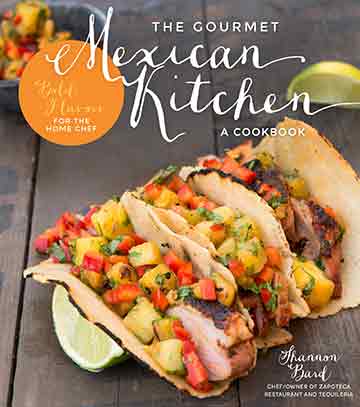 For the tamale dough

These red chile tamales are terrific. They’re a bit of work but the result is a plateful of tasty comfort food. Even if you didn’t grow up eating tamales, which I didn’t, these are easy to master.

For the newbie, this is probably best tackled as a 2-day event because it takes a while to roast the pork and there are many steps to this recipe. Besides, the pork benefits from being cooked a day ahead and having a chance to soak in the chile mixture.

It can take a few tries to get the hang of how to assemble the tamales in the corn husks—although it’s not hard. But a quick video on YouTube can be very helpful if you’ve never seen it done.

This recipe easily makes 24 tamales and you will have leftover pork for a second batch or another use.

They looked nowhere near restaurant quality, but they really looked great!! And they tasted absolutely wonderful.

The taste of corn was a perfect balance with the seasoned red chile pork. The mixture of chile powder and salt was the perfect amount. Once the pork was covered with chile salt and had come to room temperature, I popped everything in the oven and roasted it for about 4 1/2 hours. I removed it from the oven and let it rest until cool enough to handle, a little over an hour.

Shredding the pork took me about 30 minutes. (It was a large piece of meat and still quite warm.) While the pork was cooling, I seeded the peppers and toasted them in a skillet. Although 14 seemed like a huge amount, I followed the recipe exactly.

After covering the peppers with hot water and letting them sit for 30 minutes, I threw them in my food processor along with the garlic, cumin, and salt. The addition of the water really helped to loosen the mixture up and turned it into a sauce-like consistency. I poured it into the pot and stirred constantly. It didn’t change color or thicken up much at all.

While the meat was cooling, I soaked the husks in the sink. I weighed them down and soaked them for a little over an hour. I also made the dough during the meat cooling period. I used shortening instead of lard. The dough came together very nicely although it was a very large amount.

I cleared my counter and lined up the meat, husks, and dough in a nice row with my steamer pot to the right. Here comes the “fun” part. Being that I have never made tamales, I totally went by the directions on how to spread and fill the husks. My husks were nice and soft but when I would spread the dough, the husks tore.

The addition of the meat was fairly easy, but the wrapping part was a fiasco! I did my best to just take my time and carefully fill and wrap. I tried wrapping them up with the strips of husk, but after a few, I just stopped trying to tie. Some of my tamales were fuller than others and they were in no way uniform but I kept on filling.

My pot was full after 3 dozen and I had plenty of dough and meat left over. I steamed them for 55 minutes, until the dough pulled away easily from the husks. I removed the steamer basket from the heat and let them rest while I finished cleaning up my unbelievable mess.

This is a very time-consuming and fairly labor-intensive dish. I had more dirty pots, pans, and bowls than I could ever remember ever having for one dish!

Next time I probably would really have to consider cutting the recipe in half…and invite friends and family over to help devour the red tamales!