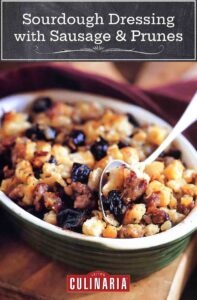 This sourdough dressing with sausage and prunes pairs pork with prunes for a savory and sweet side that goes well with Thanksgiving turkey.

Prunes appear in both sweet and savory dishes and are often paired with pork, as in this recipe. (Prunes are dried plums—in particular, the small purple plums called prune plums. Dried apricots can replace some or all of the prunes in the dressing if desired.)–Michael McLaughlin

The unexpected contrast of sweet prunes with pork sausage made this a winning recipe for our testers that they’ll be returning to year after year.

What type of sausage should I use?

This recipe calls for one pound of bulk breakfast sausage. You could also use ground country sausage but we would advise staying away from anything heavily spiced, like an Italian sausage. You can go with turkey rather than pork if you prefer something leaner, as well.

Can I make this ahead of time?

You can assemble the dressing one day before and store it in the fridge until you’re ready to bake it. If you plan on cooking the stuffing inside a turkey, do not stuff the bird until just before baking it.

What’s the difference between stuffing and dressing?

Stuffing is generally cooked inside a turkey, while dressing is baked separately in a baking dish. This sourdough dressing could also be called sourdough stuffing since you can cook it inside a turkey. For more details, check out this article on the differences between stuffing and dressing.

Sourdough Dressing with Sausage and Prunes 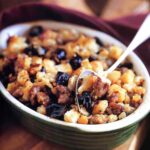 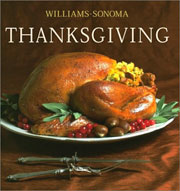 Cook the sausage and onions

To bake the dressing alongside the turkey

I love this sourdough dressing with sausage and prunes recipe. The prunes are a lovely bite of unexpected sweetness to contrast with the sausage. It makes so much! Easily feeds 15.

The cook times are accurate, and everything works wonderfully. I’d probably add more poultry seasoning in the next batch I make. The herbs were rather subtle, which is maybe the point but I would prefer a bit more. However, this is merely a personal preference and was not detrimental to the recipe.

This sourdough dressing with sausage and prunes was a very different recipe for me. Like many people, I have a tried and true recipe that I generally use to make stuffing/dressing and can be skeptical of new recipes. The poultry seasoning gave this one a very traditional type of flavor and the prunes lent a nice pop of interest to each bite.

This recipe seemed foolproof to me–each step worked pretty much as planned. It seemed like a lot of liquid at first, but it came out perfectly at the end. If you are unable to get the bread 2 or 3 days early, I think that it would work just as well to dry the bread cubes in the oven at about 300°F for 30 minutes or so. I think that this would pair really well with a pork crown roast, but would also be lovely for any holiday poultry that you like.