This French newlywed soup isn’t just reserved for those in need of honeymoon sustenance. Ample amounts of white beans, heavy cream, chicken stock, and garlic–loads of garlic–come together to create a lushly restorative meal.

The lore behind this newlywed soup from the Dordogne region in Southern France varies depending on who tells it, but goes something like this…

After the wedding party and meal, the young couple would go to a nearby relative’s house to sleep. Later that night, or early in the morning, as the case might be, those wedding guests in their late teens and twenties would search for the newlyweds and rouse them from their, er, slumber to serve them this rich soup in bed. Cooked especially for the couple, it’s intended to help them recover from their wedding night.

I’m not certain if newlyweds are still hunted down on their wedding night, but the soup lives on. The Restaurant de l’Abbaye in Cadouin is well-known for its version, served from a large tureen tableside rather than bedside. No need to be a newlywed.

There are as many variations on the soup as stories behind it. This is mine.–Kimberley Lovato

Next time you’re not quite feeling yourself, forget chicken soup and try this hearty restorative instead. 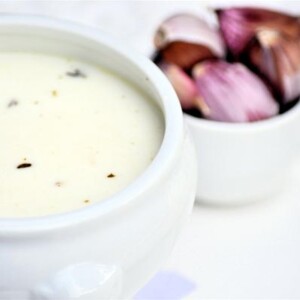 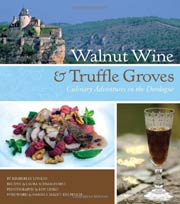 This soup is delicious. Reading over the recipe, I thought it was simple and that the final product would be similar to other soups I’ve made and/or had before. My perception was wrong—this soup had depth; it had soul. I used olive oil in lieu of goose fat, as well as low-sodium, store-bought chicken broth. I also threw in parsley as my fresh herb of choice, and did without the sliced baguette floating on top.

This was good. Since I used pre-cooked beans, I didn’t need to think about making this soup the night before, and it didn’t take as long to cook. I also used an immersion blender, which cut down on puree time. The flavor was nice, and we liked floating the bread in the soup.

We loved the history of this French Newlywed Soup! We’ve been married too long to be called newlyweds, but with 3 inches of spring snow on the ground, it was time for a fantastic and homey soup for dinner. I used duck fat, which resulted in a flavor that was subtle, creamy and delicious. The only thing I might add next time would be more herbs, or a dash or two of bottled hot sauce. There wasn’t a measurement for the herbs, so I added 2 tablespoons of chives and thyme. Next time, I’ll add 3 tablespoons. I’ll be sure to keep this recipe around for future soup days.