This horseradish cream is perfect for using in numerous ways; it’s made with fresh horseradish and sour cream or crème frâiche. Fresh horseradish makes all the difference here, it has loads more flavor and a fiery presence.

To me, when making horseradish cream there’s no point in using horseradish unless it’s fresh. I never even saw prepared horseradish before I came to America. The stuff in a jar has absolutely no flavor at all. [Editor’s Note: That last comment sounds sorta harsh, but you gotta admit, there’s some truth there.]–Cathal Armstrong

What can I serve with Horseradish Cream?

A little dollop of this horseradish cream goes with (almost) anything savory, we’ve decided. Literally. Especially roast meats. Of course, when keeping kosher, you want to shy away from serving this dairy-based sauce with roasts or meat of any sort. But even during Passover you can dip matzoh in it! Our testers also found the sauce to be quite nice with baked potatoes, broccoli, grilled cheese and tomato sandwiches, deviled eggs, crudités—and that’s just a partial list. We hear they’re every considering slathering it on brownies and stirring it into martinis. Go on, try to find something it doesn’t work with. Dare you. Oh, and remember, lest you suddenly fancy yourself a horseradish connoisseur while putting this little number together, that you can always add more horseradish later, but you can’t take it away once you’ve added it. If this is the first time you’ve encountered fresh horseradish, just approach it with love in your heart and a sturdy vegetable peeler. (Or, if the wrinkly skin is particularly knobby or tough, grab a sharp paring knife, which will also do the trick.) Then simply grate the peeled root using a grater or a Microplane—coarsely or finely, it matters little. 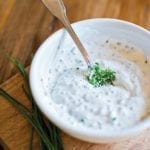 This horseradish cream has so much more flavor than the stuff you buy in a jar. Fresh horseradish is fiery in a much different way than the preserved stuff and the addition of tangy cream rounds out the dish.
Prep 5 mins
Total 5 mins
Condiments
Jewish
16 tablespoons
31 kcal
5 / 4 votes
Print Recipe 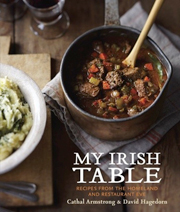 If you like horseradish and cream, you will LOVE this recipe! It’s a straightforward, easy, uncomplicated, fantastic recipe for horseradish cream.

We tried this with beef and it was A+. Then on to some baked potatoes and it was also A+. Mixed in with some stir-fried broccoli and it, too, was A+. A spoonful just by itself? You guessed it. A+. What can I say? I would wager this would even be good on hot wings or chocolate fudge.

I’m thinking of trying it in a martini tomorrow. Yes, you will want to make this many times, and it will probably only get better each time. A+ for sure.

P.S. I just made this a second time, except with crème fraîche. What can I say? Bingo again. This is just so good, made with either form of dairy. I think that with the sour cream, it has a little more depth of flavor and a certain sweetness bordering blandly sweet. With the crème fraîche, it hits the tongue with a little more “thin” feel to it. It’s also better with the crème fraîche if you let it sit in the fridge for about 24 hours—it doesn’t seem to separate as much during refrigeration as when made with the sour cream.

I can see that this recipe will rival the one for the Green Goddess Dip Goodness of a few seasons ago. I already know it’s great on rib eye, baked potatoes, Triscuits, carrot sticks.

Tonight I am going in for the kill—a burger and some cabbage slaw. I’d expect that this will become my base for almost any dip or salad dressing when I want to really impress my guests—or myself! I think this stuff would be good on just about anything—even brownies!

I vow here and now to never buy creamed horseradish ever again.

I didn’t really care much for horseradish until now, preferring to only have it if we were having a prime rib roast. But this horseradish cream is so easy, fresh, mild, and delicious, I never realized how good it could be.

The hardest part was finding horseradish root in the store. Then just 5 minutes of grating and mixing was all it took to put it together. I opted to add chives for a little brightness.

We served this with some very nice T-bone steaks and, since the recipe makes 1 cup horseradish cream, I have enough left to go with the pork roast I plan to serve for tomorrow.

I used 1/4 cup grated horseradish root, and I think the only change I’d make is to add more, perhaps as much as another 1/4 cup, for a little more punch.

At 2 a.m., I’m channeling my Grandma Bubby (my grandmother on my father’s side, the Jewish side), who, although she was not at all a good cook, I’m sure could have answered my questions: What’s the best way to peel horseradish? (The peel was much tougher than ginger, which was my best point of reference. I used a grapefruit spoon, which I doubt she had.)

How finely should the horseradish be grated? (I used the coarse holes.) Unlike the author, I’m accustomed to buying my horseradish in a glass jar at the grocery store, already prepared. And, as with herbs and spices, it’s remarkably better fresh!

While I had surprisingly little difficulty tracking down fresh horseradish, crème fraiche proved a little more elusive for some reason, so I went with sour cream, which is probably more traditional anyway. (I can’t imagine my grandmother having crème fraiche as a staple!) Then I stirred, rather than whisked, everything together since I had already dirtied the spoon and it seemed stirring would work equally well, which it did.

I’m not a big salter, but this sauce did like a fair amount of salt. Despite starting with a cup of sour cream and adding to it, I was able to put the entire completed horseradish cream recipe back into the sour cream container, with room to spare. This makes little mathematical sense, but it appeared that the additions morphed into the sour cream in such a way as to take up no space.

Right now I’m eating it on matzoh. Delicious. It could be used as a nice change of pace from onion dip with crudités. I bet it would be great even on celery. You could also dip steamed veggies into it, or serve them with this atop or on the side. It would especially be good with beets, I think. It certainly wouldn’t hurt to sprinkle some minced parsley atop.

Earlier this week, I made the Kasha Varnishkes and Roasted Applesauce recipes, and this would complement those two dishes beautifully.

After making this recipe, I will never buy jarred horseradish again! This simple and quick mixture will wake up all your senses! It has a wonderful “fresh” horseradish flavor that’s just zippy enough to arouse your sinuses, with lemon undertones. If you choose to add the fresh chives (which I did), they’ll add a bit of sweet onion note to the creamy sauce and make the condiment quite attractive.

I made a double batch and stored the leftovers in a small large-mouthed Mason jar. The horseradish cream looks great and all my testers loved it.

It was great on a grilled cheese and tomato sandwich, and I’m already thinking ahead to those hard-boiled Easter eggs and how I will use this horseradish cream to make deviled eggs.

One slender horseradish root will create about 1 cup of grated horseradish. I used a medium Microplane to achieve a nice small, fine grate. I added about 1/8 teaspoon kosher salt. It was super quick to make—took me about 10 minutes.

I love to buy fresh horseradish root, peel the outside, purée it in my food processor, and use it in a variety of sauces—mostly for red meat—so I couldn’t wait to make this horseradish cream.

I made this sauce in the afternoon, although I would have preferred to have made it the day before to let the flavors intensify, but I’d decided we had to try it that night. That was my mistake. With 1/4 cup horseradish, the sauce barely had a hint of horseradish flavor. It almost should have been called “cream with a hint of horseradish,” in my opinion.

I ended up stirring in another 1/4 cup fresh, strained horseradish. We all agreed it was good with more horseradish and would be very nice at any party on little rolls with some variety of red meat.

Let me begin by saying that we take horseradish in any form very seriously in my family.

“Horseradish sauce” (a combination of prepared horseradish and sour cream) was one of the first things I learned how to make, and I’ve never served an artichoke without it as an accompanying dipping sauce. This is why I was so intrigued to try this Horseradish Cream.

Could this new sauce become the standard for our artichokes? Yes and no. My husband LOVED it, but he doesn’t like it when horseradish burns his nostrils the same way I do.

I loved the freshness of the horseradish, but I missed the tang of the vinegar from the prepared horseradish. I wanted a bit more of a bite. In fact, I doubled the amount of horseradish after my first tasting, when I felt the crème fraiche was a bit overpowering. (So I used 1/2 cup grated horseradish in the end.) It was definitely more pronounced.

Salt is an important element here, as it will coax the flavors out of hiding, so don’t be afraid to use it. We had the cream with artichokes and flank steak, and I have to say that it was really quite nice on both, but still not a “wow” for me.

I’m curious, if you let the grated horseradish sit in vinegar first, if that would help give it a bit more oomph? Either way, it’s a lovely sauce with a ridiculous amount of possibilities (Fondue night, anyone?). The recipe produced just a wee bit over 1 cup.