One of the most popular flavors in gelaterie in Italy is crema, a simple frozen custard unenhanced by any flavoring. It has a rich yellow color due to the brightness of the yolks of Italian chickens.–Pamela Sheldon Johns

This plain Jane custard gelato is made with just cream, milk, eggs, and sugar. As noted just above, in Italy, it’s known as crema. But in our realm, it’s known as “Oh, God.” If you’ve simply gotta have some of this gelato but simply don’t want to invest in a gelato or ice cream maker, the author says to simply pour the mixture into a stainless steel bowl and stash it in the freezer until partially froze. Beat with a wire whisk until creamy, then repeat the freezing, whisking, freezing thing for at least a couple times. It may not be quite as airy as your customary ice cream, but then, with gelato, isn’t that the point? 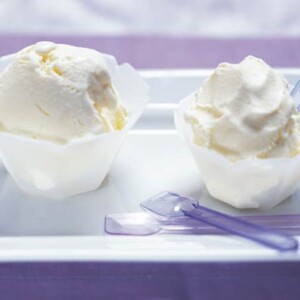 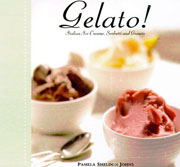 Wow—absolutely wonderful! And despite there being no vanilla in the recipe, it has a flavor almost like Crème Anglaise. This recipe reads very rich with the egg yolks, but the method of mixing in a blender or food processor creates a perfect emulsion, and the later addition of whipped cream was a completely new process for me. It takes a little over a half hour to prepare the custard, and it’s worth using a mesh strainer to catch any little globs or curdles when you put the custard to chill, as they are always there, no matter how careful you are to stir constantly. I used superfine sugar, which dissolves nicely, and the churning created a soft-serve consistency after 20 minutes in the ice cream maker. I tucked it in the freezer for 3+ hours before serving. This has a gorgeous color and tastes so good there’s on need to apologize for your homemade frozen dessert. I tasted this custard gelato side-by-side with my previous batch of ice cream (my go-to LC vanilla ice cream recipe, made with half & half) and while both tasted beautiful, the distinction between the ice cream and the gelato was clear. It’s a textural thing, and a complete surprise in the flavor you get without the addition of actual vanilla. This is a keeper.