We love this non-traditional version of the banh mi as much as the original. Stuffed with flaky salmon and pickled carrots, radish, and cucumber, this lush sandwich gets finished with a drizzle of garlic aioli. Sounds phenomenal, right?

When I was a teenager, there was a particular sandwich from a nondescript corner store that I fell in love with. It cost all of two dollars, and it was amazing—full to bursting with wild, bright, sweet, savory flavors. It wasn’t until a few years ago that I realized that the cheap sandwich I bought in twos and threes to squirrel away in the fridge was a banh mi. There’s nothing traditional about putting salmon in banh mi, but I had summer in mind with this iteration. The Vietnamese baguette on which this is traditionally served uses both wheat and rice flours. A gluten-free baguette with rice flour would also work quite well. [Editor’s Note: We gotta say, a plain old traditional baguette works well in this sandwich, too, although a number of our recipe testers opted for softer sorts of breads for their salmon banh mi and were quite content.]–Kimberley Hasselbrink

Why make banh mi at home? Uh, why not? In the words of one of our recipe testers, “When I saw that this banh mi recipe called for salmon instead of the usual pork, chicken, or tofu, I was intrigued. Plus, I’ve never made banh mi.” For those unacquainted with the traditional Vietnamese sandwich that’s been trending oh so recently in New York City and elsewhere, it’s a crusty baguette crammed with pickled carrots, daikon radish, and cucumber along with pork belly or other meats–or, as in this recipe, swanky spiced salmon. We’re pretty certain you’ll not find this type of banh mi anywhere else. 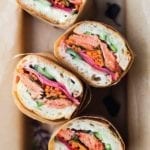 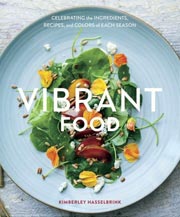 For the pickled vegetables

We loved these salmon banh mi, despite their messiness. The salmon on its own was a little salty, but when combined with the garlic aioli, pickled vegetables, fresh herbs, and baguette, it was excellent. The more I think about it, the more I think this recipe will be repeated often in our home this summer. It’s exactly the kind of thing we like on a warm summer evening when we don’t want to spend a lot of time cooking. Much of the banh mi can be made ahead, you only to have the oven on for a short time, and the assembly was very quick once all the components were ready to go. I made the aioli first since it seemed like it would be better if the garlic had more time to infuse the mayo. Then I sliced and pickled the vegetables. I did the marinade for the fish last. I wondered about the other pickled vegetables being sliced instead of julienned like the carrot—especially the daikon. It seems like it would have been easier to pickle vegetables that were cut to the same shape than it was to do ones that were as different as these. For the most part, the vegetables stayed crisp and moist, even when removed from the pickling liquid. The cucumbers were pretty soft, but the carrots and daikon held up very well. I found I didn’t care for the baguette. It was too slender to hold all the components of the sandwich. It was also difficult to eat because the baguette was quite crusty on the outside. I think in the future, I’ll use a fatter, less crusty bread or roll. I recently discovered bolillos at our local Mexican grocery store and I think they would be a great bread for this sandwich.

This salmon banh mi was unlike any banh mi one would find in stores or restaurants. And what a yummy banh mi this turned out to be. I’ve always wanted to make banh mi, but just never got around to it. We also live in an area where they are so easy to get and so very, very affordable. That shouldn’t keep me from making something, but it sometimes does. This, however, was my opportunity to make one myself. We had some Copper River salmon on hand, and we can only get it for a very short period of time every year, so when we do, we tend to do very little to it. I decided to throw caution to the wind and use that salmon for this recipe. I’m sure that the quality of the salmon contributed to the final result.

Now the components. I made the marinade for the salmon first, so that it would have a chance to cool. While it was cooling, I made the pickled vegetables, which were wonderful. I bought the smallest daikon I could find and it was still huge. Less than a quarter of it gave me the 4 ounces called for. I misread the recipe and julienned the daikon after julienning the carrots. I actually liked having both of the vegetables the same size and shape. I think I’ll do that again rather then slice the daikon as called for in the recipe. I did slice the cucumber diagonally and I liked the look that gave the mixture. After making the pickled vegetables and tasting them, I thought that there was not enough daikon, so I added about 2 ounces more. While the vegetables “pickled,” I marinated the salmon. It didn’t really take more than about a minute to make the aioli. I used lemon zest in mine and it was delicious. This is the first time I’ve ever broiled salmon. I was unsure as to how it would work, but after 6 minutes, with the fish being 6 inches from the heat source, the salmon was perfectly cooked. It was very flaky and had some browned, almost caramelized edges. I didn’t want hard baguettes for this sandwich. I find them too difficult to bite into and come away with a nice portion of the sandwich. I bought a ciabatta roll and a Dutch crunch roll. Both were extremely fresh—crisp on the outside and soft on the inside. We kept switching back and forth, trying to decide which we liked better. Both were delicious; however, we will probably go with the Dutch crunch rolls next time.

All of the components of this sandwich work together beautifully. Next time I make this, I want to mix a little bit of Sriracha into some of the aioli, just to see what that may add. I served this with some padron peppers that I had charred in some olive oil in a very hot cast-iron skillet and sprinkled with coarse kosher salt. Grenache was in the wine glass.

When I saw that this banh mi recipe called for salmon instead of the usual pork, chicken, or tofu, I was intrigued. Plus, I’ve never made banh mi. My entire family loved this recipe, including my daughter, who normally won’t touch salmon. I changed up the timing and order of this recipe a bit to suit my own needs, and it worked beautifully. I made the pickled veggies first and I let them marinate for about 3 hours. I also made the aioli about 3 hours in advance and it kept well. Additionally, I used lime zest instead of lemon, which was wonderful. My daughter even liked the aioli, and she professes to hate garlic. (I didn’t tell her there was any in it. Somehow she was fooled.) As for the salmon, I omitted the boiling water as I didn’t have time to let the marinade cool down before placing it on the salmon. I just used all the other ingredients and let it marinate for about 3 hours. The texture was a little firm but the taste was incredible. We used store-bought baguettes that you brown at home. I scooped out the innards and topped them with all the yummy ingredients. We had no leftovers. Even my husband, who isn’t a real fan of sandwiches for dinner, went back for seconds. These salmon banh mi are a definite repeater.

In looking at how long each section of this salmon banh mi recipe needed, I decided that preparing the salmon first was the rational approach since that needed a full hour to marinate. The marinade comes together very quickly and I would have had it all in the fridge in 10 minutes except I needed to remove the skin from my salmon, which added 5 minutes. Because good, wild-caught salmon is easily available, we used sockeye with its brilliant color and flavor, though a less expensive salmon would be fine. The fillets were thin and in the end, took exactly 6 minutes to broil. Assembling the veggies (sliced, julienned, mandolined) and preparing the pickles went quickly and the variety of shapes works really well, especially after they pickle a bit. Although I was making this recipe for just 2 people and needed only half the ingredients, I made the rest of the recipe to full size, setting aside half of the marinade for another day. I decided the additional vegetables would be a side salad, but they were so good we demolished them. I love how a light pickling transforms carrots and daikon, and the cucumber in slightly thicker form worked well in texture and taste! And 4 ounces daikon yields about 1 cup loosely packed slices.The total volume of carrots, cucumbers, and daikon radish is a bit over 2 cups loosely packed. I used a baguette from a Vietnamese bakery, as we have a large Vietnamese population and there are MANY bakeries and banh mi sandwich shops within a half hour from home. (I very seriously considered making my own baguette but didn’t have the time.)

While the aioli is pretty simple (I used Meyer lemon, and since they are somewhat small, included the zest of a whole one), I might be tempted to make mayonnaise from scratch with the zest and garlic for more flavor. I used Best Foods Olive Oil mayo. This step is really the only one you can do more than an hour or so ahead, but it only takes a few minutes. Since I was using raw garlic, I used my suribachi (Japanese mortar and pestle) to grind the garlic to a fine paste, adding the zest, then the mayonnaise, so there was only texture from the zest and the garlic was mellow. I think if your limes are really perfect, the zest might work, but I notice lime zest can go bitter in some things, so I didn’t try it.

While the salmon was finishing marinating and the broiler was heating, I had time to prepare the rolls, wash the herbs, and slice a few pieces of jalapeño and remove the seeds and ribs. The salmon was perfectly cooked at 6 minutes—it was just starting to crisp around the edges and develop a nice browning but without burning or overcooking the gorgeous fresh salmon. I broke the fish up gently and added it to the rolls and served up all those delicate, clean flavors you love in banh mi. This salmon banh mi may not be traditional, but it has all the elements of lightly pickled heat and freshness. I look forward to making this again. I might consider doubling the veggies so you can serve the extra on the side as a light salad.