This grapefruit and watercress salad shows off tart winter citrus and peppery watercress to spectacularly stunning effect. Also exceptionally easy to take to work for lunch.

This grapefruit and watercress salad recipe showcases winter citrus in stunning—and stunningly healthy—fashion. Sweetly tart ruby red grapefruit, peppery watercress, crisp radishes, and satisfyingly crunchy pistachios are tossed in a zingy ginger dressing. Certain to boost your mood on even the dreariest of winter days. The salad is gorgeous when arranged in layers in a glass jar to take to work, as in the photo above, although you can instead simply make the recipe in a bowl. It also handily makes just enough salad for a single serving although we dare say you’re going to be so smitten with his salad you may just decide to multiply the ingredients and make an entire week’s worth of salads all at once and stash them in the fridge to take to work day after day after day.–Angie Zoobkoff

How To Make A Salad That Satisfies

We know the biggest complaint about salads is that sometimes—oftentimes, actually—they simply don’t satisfy the appetite. Truth be told, this salad is rather modest in terms of portion size. So consider doubling the salad ingredients or adding some leftover cooked chicken, shrimp, or salmon for something that has a touch more sustenance. 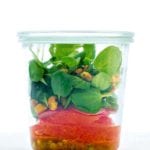 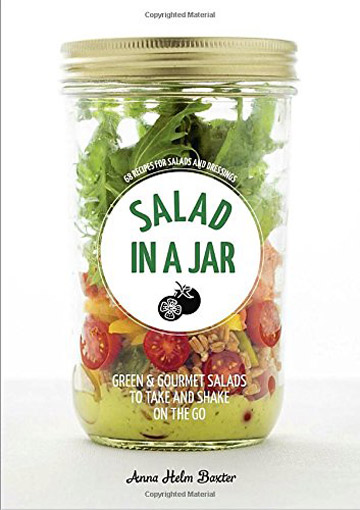 The flavor of this grapefruit and watercress salad blew me away. Who would have thought that grapefruit and ginger would taste so amazing together? The dressing packs a ton of flavor and the addition of the crunchy pistachios with the sweet-tart grapefruit and spicy greens is an awesome combination. My biggest complaint with this salad (and it actually made me quite grumpy), is the amount of work involved for something so small. This isn’t a “lunch” salad, or at least certainly not one that will get you through until dinner. Maybe nice alongside a soup or half sandwich, but it is barely a pint. For the amount of effort involved, I’d easily double recipe to get something somewhat filling. I couldn’t get watercress, so I substituted arugula. Although the jar idea is lovely if you’re taking a lunch somewhere, I often find it’s difficult to eat, or at least to get a complete bite rather than eating it in layers. I layered everything in a resealable container, gave it a shake, and then ate it from the container.

This is a fun idea for making a salad—a great idea in fact for bringing a healthy salad to work or even for a picnic. Making the dressing first and putting it in the bottom of the jar allows the salad ingredients on top to not get soggy, and then when you’re ready to chow down, it takes just a shake of the jar and pour it out onto a plate and voila—your salad is served! (I made the salad in a jar, but shook it and served it on a plate.) Not only was the method of assembling the grapefruit and watercress salad great, but the combination of ingredients was as well. I’ve been cooking with a lot of watercress lately for its peppery taste and of course, health benefits. Pairing the peppery greens with salty roasted pistachios for crunch, sliced radish for color, and tart grapefruit segments for a bright finish was very tasty. Alone, this salad would be great with even a simple vinaigrette, but the Thai dressing made the salad that much more interesting thanks to Asian-inspired ingredients with a touch of spice and sweetness. In terms of the recipe itself, making the salad in a pint jar was enough salad for a nice-sized lunch for one person. Overall, I liked the creativity of this salad—both in constructing it, its beautiful colors, and its fresh, unique flavor combination!

What a wonderful, wonderful salad! I didn’t let the fact that I can’t eat grapefruit keep me from making and enjoying this grapefruit and watercress salad. (If you, like me and millions of other people, take statins for high cholesterol, you can’t eat grapefruit. However, that is the only citrus fruit that you need to stay away from. I never let this keep me from enjoying recipes that call for grapefruit.) I made this salad with blood oranges. If you’re not familiar with blood oranges, think of the most magnificent sunset hovering over the ocean, and you will know the color of a blood orange. My salad, with the intense colors, was even lovelier than the one in the photograph. The whole time we were eating the salad (truth be told, this was not really big enough for 2 people, but I did try to share), I kept thinking of Thai chicken salad. I enjoyed this salad so very much that I made it again the next day using the leftover dressing and put some roasted chicken in it. Another winner. Although I originally made this in a pint jar, it wasn’t easy to eat the salad out of the jar. I emptied everything into a bowl and enjoyed it that way.