English crumpets, cousin to English muffins, are made in a hot skillet in no time and served with butter and sometimes jam. They’re a traditional British breakfast bread served with tea.

What, exactly, is an English crumpet? We were wondering the same thing. As with English muffins, they contain nooks and crannies galore which serve perhaps no more noble purpose than to catch a puddle of butter. Unlike English muffins, crumpets have craggy parts on only one side and the bread beneath the buttery crags is ever so slightly sweet and inexplicably chewy yet airy. Actually, as with most things in life, it’s something that’s best experienced rather than read about. So go on. Try ’em.–Renee Schettler Rossi 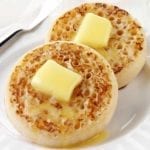 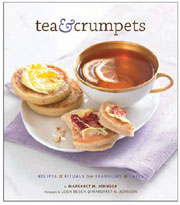 This recipe was so easy and produced a delicious crumpet. I served them warm with butter and blackberry jam and they were a big hit with my family. My 13-year-old daughter couldn’t get enough. I am so happy I chose this recipe to try. I bake a lot of breads and scones, but have never tried English crumpets. Fabulous!

I’d never had English crumpets, but they’re such a fun-named bread. These were easy to make and a treat to eat. My family hopes I’ll be making these crumpets often.

Yum. The crumpets turned out very well and reminded me of a traditional English tea. Love the texture. Such a lovely breakfast or brunch idea. I’m going to make these crumpets again this week for guests.

I have never had REAL English crumpets, so I’m not sure how true these are, but they were delicious and super easy to make. These crumpets were wonderful. They were beautiful inside—nice little air pockets—and are perfect split open and spread with butter and jam. They were also simple to prepare. It was hard to believe I had the first batch of these on the table about an hour after starting them.

These English crumpets were very simple to put together. They baked up exactly as I imagined they should, even though my rings (who has crumpet rings?) were from mini tart pans and a little bigger than indicated. I found it easier to turn the crumpets before removing the rings, but maybe that’s because mine were a bit too large. The finished crumpet was delicious just split opened and buttered, even better when toasted.

Crumpets remind me of a cross between pancakes and biscuits. Served along side butter and apricot-peach jam, they were both comforting and filling. Can’t wait to serve them at my next breakfast engagement!

This is a recipe worth raising a pinky over. The crumpets are easy to make and only require patience as you wait for the little bubbles to form in the batter. They will be making regular appearances at weekend breakfasts.

This was a very straightforward crumpet recipe with yummy results. Although I initially worried if the altitude at which we live (6700 feet) would affect the outcome, the crumpet batter rose just perfectly and cooked per the recipe directions. The warm crumpets were tasty and the leftovers were toasted for the next day’s breakfast and were just as delicious—warm with butter or, of course, smothered with jam.

It’s hard to find a good yeast bread recipe that works. Not only does this one work (specifically the rising and cooking times) but it turns out a tasty product. “Low” heat is a little subjective—just watch your first batch and adjust the flame depending on how cooked the crumpets are after 10 minutes.

And definitely butter those rings! Then, split with a fork, toast one up, and slather it generously with butter. So good!

These crumpets are fantastic hot out of the pan with a little bit of butter. They are very easy to make, too.

I just tasted one hot out of the pan with butter and raspberry jam, and these are AMAZING. They rose quite a bit, so I was able to split one open like an English muffin. It was crisp on the outside and soft, with little nooks and crannies, on the inside. I began making these at 11 p.m. on a Saturday for Sunday morning breakfast and they were ready to eat by midnight. I cannot wait to make a breakfast sandwich with sausage, egg, and cheese with one of these bad boys tomorrow morning!

I didn’t have any biscuit molds, so I made my own rings out of tin foil. I folded the foil lengthwise over itself into a 2-inch-high piece until it was sturdy, and then folded the 2 ends together to make a ring and buttered it. This impromptu method worked great.I made these in a buttered cast iron skillet with ease, no sticking.

This recipe is by far my favorite LC recipe I’ve made thus far. I have no reason to purchase crumpets or English muffins from a bakery or store ever again. These even beat the local bakery version…by a lot!

My only suggestion is to use a large bowl when mixing the ingredients because they do rise and the batter overflowed my 4-cup glass measuring cup during the rise. Still, I’m a happy girl and can’t wait to make my Sunday a.m. breakfast sandwich with these tomorrow!