Skip to content
Home | Recipes | Fish in Parchment
Jump to the recipe
Shares4.1kPinShareTweetYummlyShare on FlipboardEmailHeart this post

This fish in parchment is a healthy method for cooking fish to delicate perfection along with summer squash, zucchini, and olives in a buttery white wine sauce. 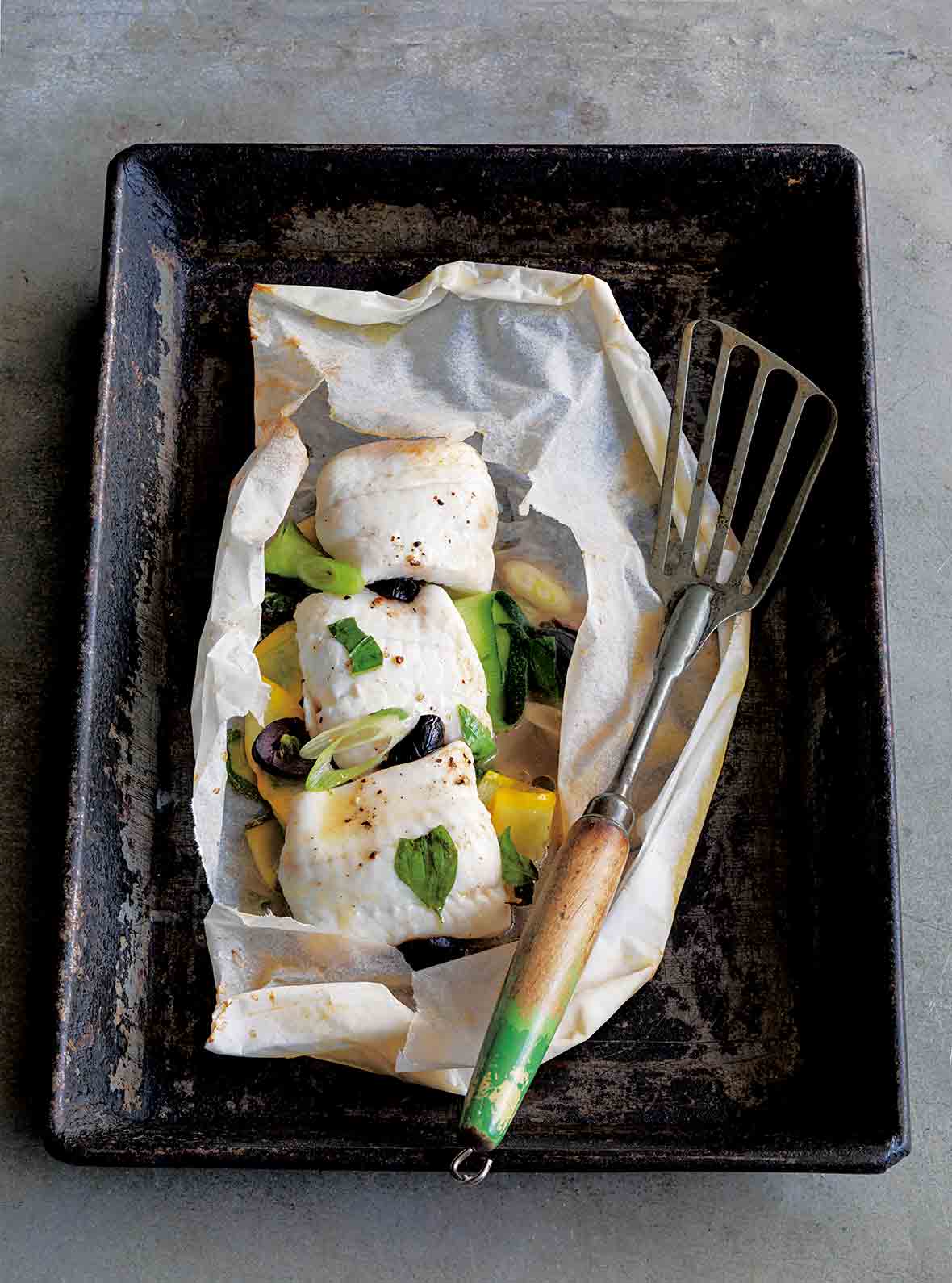 I serve these fish parcels just as they are, so people can open them up at the table. The steam billows out and the aroma hits diners smack in the face. It’s really theatrical, and so much fun.

I love the colors and flavors of this dish. The black olives and basil add a salty, herbal tang, although the overall effect is surprisingly delicate.–Bryn Williams

There’s a single point of controversy in this eminently versatile, really quite customizable, otherwise foolproof fish in parchment recipe. And that’s when to add the basil. Slip it into the parcel prior to cooking and your guests will be wooed by its licorice-like fragrance the moment they slit their parcels-although they may also be confronted with a potentially soggy basil leaf or three clinging to their sole. The alternative is to thinly slice or tear the basil and pass it on the side for guests to shower over the sole after the packets have been slit open, an approach that appreciates aesthetics over aroma. Suit yourself, whether you follow the recipe below or simply use it as a blueprint.

Place the scallion, summer squash, green zucchini, black olives, and basil in a bowl. Season with salt and pepper, drizzle with the olive oil, and mix well.

Divide the vegetables among the pieces of parchment paper or foil, placing a small but heaping mound in the center of each square.

Place three sole fillets on each mound, and fold each portion in half to prevent it from overcooking. Season the sole with salt and pepper. Divide the butter evenly among the mounds and dribble a scant tablespoon of wine over each. Fold the paper or foil over the sole to create sealed parcels (fold in opposite sides at the same time, then repeat with the two remaining sides. Seal the parcels tightly by folding over the edges and crimping them together. Be sure to leave a little space inside the parcels for the steam.

Place the parcels on a rimmed baking sheet and place in the hot oven until the sole is cooked through, 10 to 14 minutes. (If using foil, it may take a few minutes longer.) Serve the parcels at once, placing them on plates and offering each guest a sharp knife to slit the parcels-and an equally sharp warning about not holding their faces too near the steam-puffed parcels as they set about making said slit.

Easy to put together and easy on the waistline, this is a perfect meal when there’s plenty of local zucchini around. I left out the olives but tossed the basil with the vegetables. Oh yes, I also cut back on the butter, but it didn’t matter. There was plenty of flavor and a light sauce. I put about 1 tablespoon wine in each packet, which made more sense to me than dividing 3 tablespoons of wine by 4 as called for in the recipe. I served some whole wheat couscous on the side. This would be great with any thinly sliced vegetable, just be careful to cook it through.

I’ve cooked fish in parchment or foil for years and always enjoy finding a new recipe. I did cook this for a few minutes longer than the recipe suggests. I love cooking this way because it makes it easy to customize each portion with minor changes to suit each family member’s taste (e.g., more olives for one person, a little less scallion for another) and there’s little to no cleanup. The dish had a very mild flavor; next time I may add a little garlic. And I will make this again.

I tried this recipe with tilapia and really enjoyed it. There’s a great aroma when you open the packages. The fish is moist and the zucchini is crisp yet tender.

Light. Fresh. Easy. We really enjoyed this quick and satisfying dish. The butter made it just rich enough yet was very respectful to the other gentle-mannered ingredients. Another nice thing about this recipe was that a little flexibility didn’t seem to affect the result in a negative way. Since my usual market didn’t have sole (darn), I bought haddock in thin, delicate fillets that could also be folded as instructed. I used about 6 ounces for each packet and it cooked beautifully. Instead of dividing 3 tablespoons of wine into 4 parts, I used 1 tablespoon per serving for easy measuring, and I doubt it hurt given the wonderful broth that collected at the bottom of each pouch. If you want that this-is-summer basil punch, save the herb and top the cooked fish with torn leaves.

Indeed, this is a very delicate way of preparing sole and the ingredients work beautifully together.

The title of the book that this recipe is from, The Perfect Ingredient, says it all. The success of this dish is completely dependent on having fresh, in-season ingredients. Once one learns the basic technique, it lends itself to infinite variation. It’s worth seeking out parchment paper, as foil lacks aesthetic appeal and may react with any acidic ingredients. Not only is this a fun dinner party dish to serve, but guests can participate in creating their own packets!

This is a lovely and easy recipe for the summer that requires relatively little prep work but results in a dish that’s fancy enough for guests. I ended up julienning the vegetables, but think that thinly slicing them would have worked as well. Also, I liked the recommendation to serve the parcels at the table so that dinner guests could open up their packets individually—it’s fun to see people’s faces when they breathe in the punch of aroma. I served this with a rice pilaf on the side.

What a simple and delicious weeknight dinner. I don’t know why I forget how quick and easy steaming in parchment can be. When I first saw this short and simple ingredient list, I was afraid the dish would be boring or bland, but that was not the case at all. The vegetables, basil, and wine melded beautifully. The result was moist flavorful fish, perfectly cooked zucchini, and a lovely little wine sauce. And the bonus of hardly any cleanup. It’d be easy to mix the vegetables up for variety.

The flavors of this fish recipe were a pleasant surprise. I was expecting the fish to be bland, but in fact, although the fish was delicate, the flavors were lovely. I have to confess that I used chives instead of scallions and left out the wine. I had a hard time following the instructions to make a parcel. My parcels were fairly wonky-looking. They served the purpose though. This is a quick and easy recipe that is fairly healthy (you could easily leave out the butter). The packets do have quite a bit of juice when you open them so serving the fish with some rice or couscous would be good.

A very nice, light dish for lunch or dinner. It presents nicely on a plate and gets the expected oohs and aahs when opened and steam billows out. This is easy enough to make on a weeknight after work. I was unable to get yellow zucchini so I used several more green ones. I will certainly make this again, but maybe change some of the vegetables and use another fish instead of sole (maybe catfish or tilapia.) I think this would be awesome with the delicate vegetables that appear in spring.

This is a wonderfully easy recipe to make. I followed all the instructions and 15 minutes later I had a very flavorful packet of fish. We thoroughly enjoyed it with a spinach pilaf that I made. It’s going to be an all-time favorite in our family.