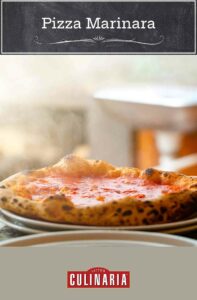 Jim Lahey’s tomato pizza, which also goes by the name pizza marinara for the name of its sauce, may forever ruin takeout pizza for you. It’s not only the best red-sauced pizza we’ve ever slung, it’s also one of the easiest.

It may be a good idea to make this elemental tomato pizza first, before moving on to anything else like the white pizza. I know that at first blush it seems too simple to be good, mostly just sauce and bread. But even if you doubt me now, I don’t think you will later. This pie is great practice for preparing my dough and learning my cooking method. If I start thinking about this unadorned tomato version, for instance, I know that with a simple addition of flavorings it can easily be transformed. It’s all a matter of imagination, something like architecture; you build a base and go from there.–Jim Lahey

WHAT IS A GOOD TOPPING ON A PIZZA?

Oh, the places you’ll go with this tomato pizza! Mind you, there’s rapture to be had with this plain pizza simply as-is. But there’s no need to stop there. Here are just a few suggestions for a topping triple threat. Fresh mushrooms, spinach, sundried tomatoes, and provolone. Caramelized onions, balsamic drizzle, and goat cheese. Pancetta, onions, and fontina cheese. Fresh garlic, shaved asparagus, and Parmesan. Fresh, soft cheese and a pile of basil. Lahey’s personal recommendation is charred Thai eggplant and bonito flakes. We’re going to stop there, not because we can’t think of countless more options, but because we really need to go make ourselves one of these pizzas. 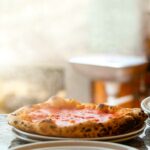 Spooned on a Magherita, or any kind of pie, this sauce does exactly what it's supposed to do, adding the pure flavors of tomatoes without overwhelming the integrity of the pie itself.
Jim Lahey
Prep 35 mins
Cook 3 mins
Total 1 hr 30 mins
Mains
Italian
8 servings
166 kcal
5 from 1 vote
Print Recipe 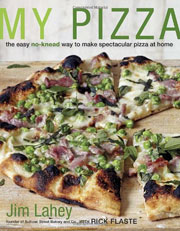 The elements of the electric ovens are generally designed to turn off when the oven reaches 500°F (260°C) or 550°F (288°C) and the door is closed—even if it’s the broiler doing the heating and not the baking element. When you completely understand how I use my gas broiler continuously to force the stone to be hotter on the surface and also to cook the pizza (door closed) so the crust chars properly and the toppings cook quickly, the electric’s shutdown feature may strike you as a potential problem. It’s easily solved. For electric ovens that have a broiler in the oven, turn off at 500°F (260°C) or so, place the stone on a rack about 4 inches from the top heating element (not the 8 inches called for with gas) and preheat, on bake, at 500°F (260°C) for the usual 30 minutes. Then, to boost the heat of the stone without the oven’s elements shutting down, open the oven door a few inches and leave it ajar for about 30 seconds. Some of the ambient heat will escape, but the stone will stay just as hot. Now close the oven door and switch to broil for 10 minutes to heat the surface to the maximum. Open the door and slide the pizza in to broil. Because the stone is so close to the element, you may need to pull the rack out a few inches to get the pie centered on the stone; do it quickly and don’t worry about losing too much heat. With the door closed, broil for roughly 2 minutes longer than specified for gas—until the crust is adequately charred but not burnt and the toppings are bubbling. Remember, it’s the visual cues that count most. Check a couple of times; the pizza will cook quickly. For electric ovens that have a gas broiler in a bottom drawer of the oven, start with the stone in the broiler at the lowest level or on the floor of the oven. Preheat on low broil for about 20 minutes, and then switch to high for another 5 minutes, or if you just have one setting preheat for 25 minutes. Slide in the pizza, close the drawer, and broil as instructed by the recipe (often 3 1/2 to 4 minutes), until bubbling and properly charred, checking to be sure it’s not burning.

This had a really fresh taste even with canned tomatoes and I used Glen Muir fire roasted. The herbs are just a perfect combination. And the vinegar took it up a notch so don’t leave it out. I do think you could use less oil in the garlic. I used 1/4 teaspoon of salt and a full 2 tablespoons of vinegar. It was very good on the pizza for a base, light but flavorful, you can really taste the herbs.

I confess that when I first read this recipe, I cringed… absolutely too much reading and instructions for a homemade pizza night. The second time I read it, I thought “maybe one day I’ll give it a try…” As luck would have it, I had a sourdough pizza crust ready for the grill and it was just pouring rain outside, my toppings of dressed arugula and smoked salmon were prepped as well as my fresh garlic knots and pepperoni my daughter had requested. I’ve never made pizza marinara and I’ve never even been interested in making marinara sauce as Costco has a pretty great one I enjoy as a fast food option. As they say, the third time is a charm.

Out of necessity, this long recipe made much more sense and 30 minutes later we were enjoying our first oven broiled marinara pizza specimen. Oh. It. Was. Glorious. From squishing the canned San Marzano tomatoes, to slicing the garlic, measuring the olive oil, and decanting some dried oregano, to shaping the dough (10 minutes… I just can’t believe I baked a pizza crust under my electric oven broiler on a pizza stone over 6 minutes).

The flavours were fresh, the texture was crispy and chewy, the look said Italian pizza oven, and my previously planned toppings also worked broiled using the same method although because of the topping weight the crust was not as crispy. Knowing this, I moved my rack and pizza stone to my usual position for baking and baked my last pizza. This was easy and safe while making a pizza party with different toppings a less daunting possibility. Amen to homemade oven broiler pizza!