This English muffin bread recipe from Cook’s Country is incomparably easier to make than traditional English muffins yet bears all the requisite nooks and crannies that God–and the English–intended.

This English muffin bread recipe from the folks at Cook’s Country and America’s Test Kitchen is spectacularly easy and quick to stir, shape, and bake compared to traditional individual English muffins. Yet it retains that terrific and characteristic dense, chewy, English muffin-ness perfection, including the requisite nooks and crannies needed to trap pools of melting butter, which is just as God—and the English—intended.–Renee Schettler Rossi

*Can I Substitute Regular Flour For Bread Flour? 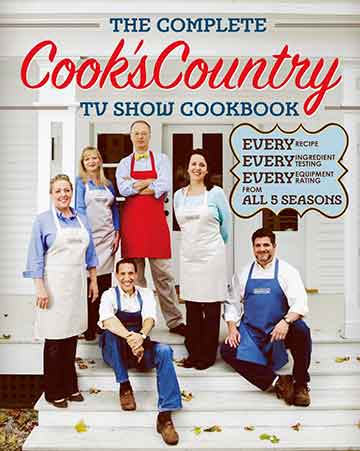 This English muffin bread recipe is definitely a winner. It looks and tastes like English muffins with all the requisite nooks and crannies. And it’s a cinch to make. The recipe was perfect. I’ll be making this bread regularly.

English muffins hold a special place in my heart. When I was a kid, my mother experimented with every test kitchen serving suggestion displayed on the long narrow packaging. I’m not quite sure what my Neapolitan great-grandmother would have made of English muffin pizzas, but we sure loved them. I ramble on in this way because given my experience, I’m officially proclaiming myself an English muffin expert. Yes, I do indeed believe I have logged 10,000 hours eating these babies.

Let’s talk about this English muffin bread recipe. What makes this different from ho-hum bread? It’s the crannies, the spongy yet toothsome crumb, and the sides coated with cornmeal. It’s how salted butter can barely soak into the rich, moist bread, so the butter kind of pools and rolls about on the surface, almost always guaranteeing a shirt-soiling drip of uh-oh. Sound familiar? It’s a replica of all the things you love about English muffins but with the added bonus of a true king’s ransom—2 loaves in 1 kitchen session!

And really, the recipe couldn’t be easier. Measure, mix, proof, divide, proof, bake, cool, toast, and eat. Whaaat! The only tricky aspect is dividing the dough. Here’s my advice: Begin by “pouring” the dough into 1 loaf pan, and when you think you are coming close to half the amount, chop it off deftly at the bowl rim using your bench scraper. Move onto the second loaf pan and let the dough roll out of the bowl into the pan. Don’t under any circumstances try to manipulate or cut this sticky beast on a board or you will have a big mess, and a mess means you won’t like making this recipe, and we can’t have that. Okay? Heed my warning and “use the force.” Gravity, that is.

Enjoy, my friends! I relish the thought that a second loaf is stored in the freezer and it’s mine, all mine…

The only thing that I recommend is after you put the dough in the pans, sprinkle the top with a generous amount of cornmeal so the dough doesn’t stick to the plastic wrap. English muffins are usually surrounded with cornmeal, so it seems appropriate. Also, when you make this recipe, you have another great option. You can make the 2 loaves, or you can do as I did and make half the dough into English muffins. To do this, you will need a 10-inch cast iron skillet and 4 English muffin rings (These can be found online or at any kitchen store. Pour a few inches cornmeal in a small bowl, spray the rings with cooking spray, and coat the inside of the rings with the cornmeal. Put the rings in the cast-iron skillet and heat the skillet to medium-high. After the skillet heats, sprinkle a liberal quantity cornmeal in the skillet inside of the rings. Now take a healthy wooden spoonful of dough, drop it in a ring, and push it to the edges with the spoon sprayed with oil. You can fill it to just below the top of the ring, and it will be the perfect size. Cook the muffins on medium-high for a few minutes. You may notice a little smoke from the cornmeal in the skillet, and you should smell a slightly toasty smell. Slide a spatula under the muffin ring and flip the entire thing, cooking for another 3 minutes or so. Cool the English muffins on a wire rack and enjoy.)

I was thrilled with this English muffin bread recipe! Nooks and crannies galore, wonderful texture, and toasts up beautifully. The dough was a breeze to throw together with very little hands-on time required. The rise time was minimal and it baked up nice and golden.

Despite having baked bread for a decade now, I found that for some reason, I’d never tried making English muffin bread. Now that I’ve tried this recipe, English muffin bread is going into the permanent rotation, primarily because it’s so darned quick to make! I love that it takes less than 2 hours from start to finish. There isn’t even any kneading involved!

Here’s the timeline: Sunday morning I woke up, set the coffee brewing, and mixed up the batter (it’s really more of a batter than a dough). By the time the coffee was ready, the batter was rising. We watched CBS Sunday Morning while sipping our first cups of coffee, then it was time to pour the batter into the bread pans. While the bread was rising in the pans, we toasted some bread for breakfast. Five minutes before the end of the 30-minute resting period, I turned on the oven. When the timer went off, the bread was fully risen, and the pans went into the oven. Another 30 minutes later, during which I got some laundry done and cleaned the bathrooms, we had tender, crunchy, fresh bread. By this time, we’d also had a chance to digest our breakfasts and were ready to go for a 5-mile run. Talk about a perfect (and productive!) Sunday morning. All this before 11 am! By the time we were home from our run, the bread was ready to be used for lunch.

In addition to toasting, we found that it makes excellent grilled cheese sandwiches. I can also see it working really well grilled with some Plugra butter and honey for breakfast or grilled in a BLT. Yum!

A few notes about the tools and techniques:

I hate having 2 loaves come out different sizes. If the difference is great enough, you end up having to watch the smaller loaf carefully to make sure it doesn’t over-bake. So I used a scale to weigh out the 2 pans, and they each came out to be about 1100 grams, pan included. I used a fork to pull out a little bit of batter from one pan to add to another, as a spatula would not have worked here. (This is a bigger problem with cakes than with bread, but it’s still good practice to weigh out your loaves to ensure consistency.) Case in point: There was ~40 grams difference between my two loaves (yes, I was a little imprecise here), and when I took the temperature of each loaf coming out of the oven, one reached 205°F right away, while the other barely hit 200°F after the thermometer had been left in for a minute. We only had fine cornmeal in the house, but I think next time I’ll use coarse cornmeal to give the final product a more noticeable crunch, which, let’s face it, is one of the best features of English muffin bread!

I’m lactose-intolerant, so I used goat milk, although I think soy milk might work well, too. The first rise took about 40 minutes to double and bubble. The dough was very light, moist, and sticky. It’s a very good idea to butter your spatula before trying to scrape it out of the bowl! When I put the bread in the oven, there were large bubbles in the dough, which had risen above the level of the pans. However, when I rotated the pans after 15 minutes, the center had sunk and didn’t rise up again. It was more like a pain de mie than an English muffin but quite good nonetheless.

My 15-year-old taster liked it quite a bit, too. I think it would make great French toast!

This is such a simple bread to toss together. There’s no kneading to worry about here. Just like regular English muffins, the true tastiness comes only when the bread is toasted. Without toasting, the bread is spongy and tasteless. After toasting, slather it with butter and jam, and it’ll be a fantastic addition to your morning breakfast.

The recipe delivers on exactly what it promises. It makes a loaf of bread with qualities very similar to English muffins for a fraction of the effort. I really was skeptical that a recipe with such short fermentation times would have much flavor or air bubbles, but it really does due to the amount of yeast and baking soda.

I served it sliced, slathered with butter, and grilled on a griddle. Then I topped it with 2 over-easy eggs. That made for a tasty breakfast. I did need to bake it about 20 minutes longer than the recipe specified, but that was due to using a ceramic bread loaf pan instead of a metal one.

Quick and easy. I mixed the ingredients in my KitchenAid as the dough is too sticky to do by hand. It rose nicely in about 40 minutes. Dividing it evenly was a bit tricky, and the dough filled the pans a little more than 2/3 full. The second rise was very quick. In 20 minutes, the dough had crowned over the edges of the pan. I took the loaves out of the oven after about 27 minutes.

It didn’t have the large nooks and crannies of the muffins, nor the tang, but it was very good toasted, as it was meant to be.

When you can whip up a homemade bread of any sort while making dinner and getting phone calls, you know you have a simple and successful recipe on your hands. This recipe is simple and works like a charm. The dough is beautiful as it rises and works perfectly. The ingredients can easily be mixed together with just a spoon and a rubber spatula.

In order to use a couple pans of the same size, I ended up using a ceramic pan and a metal pan. The ceramic pan was a bit deeper, so that bread got a slightly better rise and thus looked a bit nicer. It took about 10 minutes longer for the loaf in the ceramic pan to reach 200°F.

This bread was easy to make and tasted good as well. I’m not sure it’s really like an English muffin because there weren’t huge craggy holes but it was nice toasted and served with jam.