These maple pork chops are bathed in a marinade of maple syrup, soy sauce, and rice vinegar. The marinade doubles as a glaze for the finished pork chops. An easy weeknight meal.

My friend Rory coined the name “candy pork chops” when she was serving these maple pork chops to her 3 year old. Her rule: Whenever a dish is remotely sweet—and thanks to the maple syrup marinade, this one is—use the word “candy” in the name. Instant hit.–Jenny Rosenstrach

How do you cook pork chops without drying them out?

It depends on the particular type of pork chops. But when we’re talking thick-cup pork chops as in this recipe, there are a few things.

Buy pork with as much fat as possible on them

Fat equals flavor. It also tends to bath the pork with its goodness as it melts, which in turn helps prevent the pork chops from drying out.

Start them on the stove, finish them in the oven

A quick sear on both sides lends the pork chops a little color and flavor, but you don’t want to keep them on the stovetop because by the time the inside is cooked to doneness, the outer parts will be completely dried out. The solution is to give them a sear and then slide the skillet into a hot oven so the heat can more gently permeate the meat.

Use a thermometer to check for doneness

The most accurate way to know when you can remove the pork chops from the oven is to know its internal temperature. And for this you need a digital thermometer. 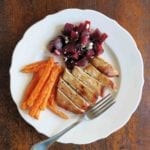 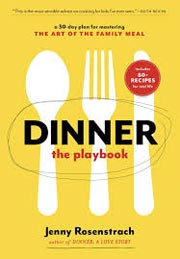 Just a few minutes, a resealable plastic bag, and a few staples from the pantry, and ta-da! Some of the most beautiful and delicious maple pork chops I’ve ever made. If you love pork chops, you’ll find that this is a terrific recipe. I’ll certainly be putting these in the rotation.

This maple pork chop recipe is a rock star! The marinade is simple, easy, and tastes great. You probably already have everything you need in your fridge and pantry. (That’s another great thing about this recipe—nothing out of the way or really kooky to hunt for at the store.) Boneless center-cut pork chops are called for, and that is what I used. However, I’m willing to bet that this recipe would be just as good with almost any kind of pork chop you use.

I marinated my pork chops for a little more than 2 hours, and they could have spent more time in the bag with no ill effects. I timed my chops at 15 minutes in the oven, turning them at 7 1/2 minutes. Next time, rather than rely on time, I’ll just do the “take a look” test. Easy and tasty. Let’s do it again.

These maple pork chops are family approved. My chops on the bone were 1 1/4 inches thick and took 25 minutes in the oven to be firm in the center, and still tender and juicy. I marinated the chops overnight. I think next time I’ll brush with more maple syrup the last 10 minutes of cooking. They didn’t “candy” on the outside as much as I would’ve liked, and I think brushing with maple syrup would help that. I served the pork chops with carrots roasted in duck fat. The wine we had with the meal was Ponzi Willamette Valley Pinot Noir 2011. It was the perfect fall meal.

Love this flavor. Using real maple syrup in just about anything is a veritable treat, but pairing it with pork chops is divine. I only had a couple of hours for the pork chops to marinate, but I would advise to start marinating in the morning and then cook the chops for dinner. The lovely flavors of the marinade only came through ever so slightly, I don’t think it did justice to the recipe. I think 6 hours would probably be perfect.

Since I didn’t want to waste the marinade, I simmered it for a while to reduce and then saved it along with one pork chop we couldn’t finish. The marinade had turned into a fabulous sweet gravy that went splendidly with the leftover pork chop and mashed potatoes. Just 8 minutes per side in the oven was perfect for these maple pork chops. And cold Racer 5 ales made for a great beer pairing.

This maple pork chop recipe is delicious. For such a simple marinade, it packs a lot of flavor. The garlic was a pleasant note in the background, and while the chops were a little sweet, they weren’t overly so. Everyone loved them.

The first time we made this, we marinated the pork chops overnight. Cooking time took 12 minutes in the oven, which resulted in the chops being juicy and tender. On the retest, I made the marinade and allowed the chops to marinate overnight. The next evening I heated a cast-iron grill pan on high and seared the pork chops on each side for 2 minutes and then instead of finishing them in the oven, I reduced the heat to medium and cooked them for another 5 minutes per side.

I strained the marinade and put it into the pan, adding an additional 1/4 cup maple syrup. I allowed the sauce to reduce until slightly thickened then added the chops to the sauce to finish cooking for a few more minutes until they reached an internal temperature of 145°F. I left the chops in the sauce after turning the burner off while we warmed up the side dishes. The pork chops were tender, very moist, and full of flavor.

The only change that I would make is to look harder for Grade B amber maple syrup. It’s better suited to cooking since it has a stronger taste and would have made the maple flavor a little more pronounced. We found regular maple syrup to be nice but a little subtle.

These maple pork chops makes a great weeknight dinner. It’s easy to prepare and will appeal to anyone who likes pork chops—both kids and adults. If you marinate the pork chops in a resealable plastic bag and line the baking sheet with foil, there is very little clean-up required.

While there is an element of sweetness in the marinade, it’s quite subtle and very much understated by the time the pork chops are on the plate. I marinated the pork chops overnight and then baked them for about 10 minutes. I used an instant read thermometer to confirm that the pork chops were perfectly cooked to an internal temperature of 140°F. They were very moist—any longer in the oven and they would have been overcooked, but I think you need to gauge the time based on the thickness of your pork chops.

I also think this recipe would work nicely with bone-in pork chops. There is always a bit more flavor with meat on the bone and the only difference in preparation might be a bit longer cooking time.

This review is for the stovetop version of the maple pork chops that are finished in the oven. I marinated the pork chops for 12 hours in the refrigerator. I drained and patted dry each pork chop, as indicated in the recipe, then I heated an ovenproof skillet over medium-high heat and pan-seared the chops until brown on both sides, about 3 minutes per side. I finished the chops for the last 8 minutes in the oven.

This batch had a beautifully brown exterior as compared to the pale oven-only version and was much more appealing on the plate. The flavor was also a bit better than the first version, with a hint of sweetness from browning the chops. Overall, I really expected the finished chops to have a prominent sweetness, but they were mild at best.

I think pan-searing and oven-finishing is the way to go to yield juicy, browned chops. What about using normal soy sauce in the marinade? I usually brine my pork chops and the higher salt content from regular soy sauce might add some additional flavor. I think the chops could also use a glaze at the end of the cooking process.

This pork was tender and sweet and was complemented by the side dishes, which included vinegar peppers and risotto alla Milanese. They came out just delicious. I give the recipe a 10.

This recipe’s hands-on time, with the gathering of ingredients and making the marinade and placing the pork chops in the refrigerator, was just 10 minutes. I marinated the pork chops for 1 hour, during which time I did the prep for side dishes. It took 15 minutes to cook the chops, and I let the chops rest, covered under aluminum foil, for 10 minutes before serving.

I’ve barely touched a pork chop voluntarily in the last two decades, as I thought I didn’t like them. Turns out I just didn’t like the chops of my youth—tough, gristly, mostly tasteless, and always plopped next to a sad mound of canned sauerkraut. These maple pork chops, on the other hand, have hints of maple and umami that would appeal to most any palate, though I do wish the marinade had been more present. I was afraid they’d end up too sweet, but that wasn’t the case.

The recipe is a breeze to make and requires just a few common ingredients. My chops were on the small side and could have done with less time in the oven, and perhaps a quick stovetop or broiler browning—ideally they’d be a bit more tender inside but have more of a char on the outside. I think this marinade would be great on chicken and fish as well, but I’d recommend soaking any protein that you’re using overnight, and chopping the garlic. I served the pork up with the remains of my last outdoor farmers’ market: chard, lemon, butternut squash, brown butter, and pine nuts.