This macaroni au gratin is no ordinary macaroni and cheese. Not at all. It’s still pasta in cheese sauce but blanketed with a layer of ooey, gooey blend of three cheeses. Easy and on the table in less than an hour.

This easy macaroni au gratin is so magnificently and outrageously incredible that folks are actually applauding it at the dinner table. (We’re not kidding. One of our testers actually received a round of applause from her family after serving this elegant riff on macaroni and cheese—the first time that had happened in 30 years of her cooking family dinners.) But what really swayed us about this recipe is just how quick and easy it is to make compared to a lot of macaroni and cheese recipes. It’s simply macaroni smothered in a luxuriously rich sauce containing cream and three cheeses (three!) and then everything is broiled to a crisp golden brown. Obviously we, too, think it’s something to clap about.–Angie Zoobkoff 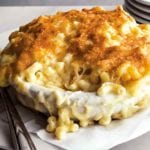 This macaroni au gratin is no ordinary macaroni and cheese. Not at all. It’s still pasta in cheese sauce but blanketed with a layer of ooey, gooey blend of three cheeses. Easy and on the table in less than an hour.
Prep 20 mins
Cook 25 mins
Total 45 mins
Mains
American
4 to 6 servings
846 kcal
4.58 / 7 votes
Print Recipe 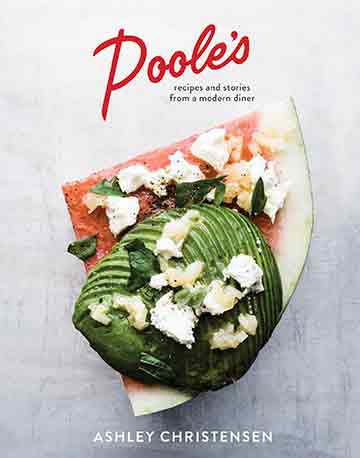 This macaroni au gratin is one of those rare recipes with only a few ingredients that turns into heaven on a fork. In over 30 years of cooking, this is the first time my family actually clapped. I couldn’t understand how this would come together with no butter, no flour, no roux. It’s magical.

I broiled it for the full 5 minutes to a perfect caramelization. It’s very rich so it made 6 to 8 servings.

This macaroni au gratin is comfort food taken to a whole new level. Unctuous, rich, creamy—the combination of cream and the mix of cheeses makes this dish what everyday macaroni and cheese aspires to be!

I used Parmesan, old Cheddar, and Jarlsberg and found it to be perfectly balanced—the Parmesan added salt, the Cheddar was creamy, and there were a few stretchy strands studded throughout from the Jarlsberg. The macaroni was perfectly al dente and the cheese crisped up to a crunchy crown on top. Bonus points for the fact that all of the ingredients can be on hand all of the time and, start to finish, the dish can be on the table in well under an hour! Just 45 minutes from “I think I’ll make this” to “I think I’ll eat this”! It took only 20 minutes to boil the pasta, grate the cheeses, and tidy up—very quick.

I was doubtful that the pasta would be done at 5 minutes but took it off at that point as per the recipe and it ended up perfect. I baked it in a shallow oval pan that was 11 by 7 by 2 inches and the macaroni filled nicely and there was lots of surface area for the broiled cheese on top.

It’s very rich. Although the portions didn’t look overly large, this is so filling that it easily fed 4 of us with a little salad on the side. The second time I made this—yes, I made it twice in one week!—I used half and half in place of the cream, Emmental in place of the Jarlsberg, and folded in some sautéed mixed mushrooms. It wasn’t quite as rich but was also very nice.

I served this for lunch but could it could easily be presented as an appetizer with spoons for everyone to dig in. Serve with some crusty bread to get every last bit of cheese sauce. I used Parmigiano Reggiano and an aged Cheddar in addition to the Jarlsberg.

Can you ever go wrong when combining macaroni with cheese? Well, imagine combining macaroni with three cheeses! It’s a feast for the senses! Not to mention yummy! While making this macaroni au gratin recipe, I kept drooling at the thought of the finished product. I was a little apprehensive about using Jarlsberg because I’ve never tried it before, but the nuttiness balanced the sharpness of the white Cheddar and balanced the dish as a whole.

I will definitely try it again but will serve it in individual ramekins, probably add some fresh cracked pepper, and cut the recipe in half unless I have company. (It does not warm up well in the microwave.) All in all, a grown-up dish well done for supper or brunch.

This macaroni au gratin recipe turned out to be a nice surprise. It was very simple to put together, all measurements were spot on, and the timing was right.

I used Grana Padano. The macaroni took almost no time to cool so everything went together quickly. It’s very runny when you pour the cream and pasta into the baking dish but don’t worry, it comes out just fine. I was a little concerned when I pulled it out of the oven because there was a layer of grease from the cheeses. Once it sat for a bit it all absorbed back into the macaroni. The only thing I would change would be the amount of salt. It had a salty flavor. I would use just 1/2 tablespoon kosher salt in the water for the macaroni and leave out the sea salt in the cream sauce.

Macaroni and cheese. Comfort food that, for some reason, I have not been making much of in recent years. Perhaps I have been wanting to make my comforting dishes a bit more healthy. This macaroni au gratin recipe was a nice excuse for me to make something a bit more indulgent.

Unlike many mac and cheese recipes, this did not have a roux. Cooking down all of that heavy cream made for a nice thick sauce. Now, although this was really delicious, I think that 2 cups of heavy cream were not entirely necessary. Truth be told, I don’t think that they were necessary at all. I would recommend trying the recipe using 1 cup heavy cream and 1 cup half and half. If that works well, I might try using all half and half the next time I’d make this recipe.

The mixture of the 3 different types of cheeses worked well. I felt that the Jarlsburg, although only 2 ounces, was very distinct. I served the gratin with a lovely salad with roasted beets and sliced purple onion. I also cooked up the beet greens with a paste of garlic and coarse salt. They were both great foils for the richness of the mac and cheese.

I was very happy with this macaroni au gratin.

I didn’t add any salt during the cooking as the cheese provided a lot of salt. I found that after the cream had boiled, it didn’t thicken significantly in 90 seconds, and I thought it would have required further boiling to reduce the volume and to thicken it. However, I went with the recipe and added the cheese and found that after the time in the oven it seemed considerably thicker in consistency.

I would make the dish again and I thought of adding cooked bacon or chorizo to the recipe if I was making it again.