This asparagus and fried egg panini is made from thickly sliced sourdough bread stuffed with grilled or sautéed asparagus tossed in a lemon dressing, a fried egg, Tallegio cheese, and arugula. Then the whole shebang is grilled in butter until toasty and golden brown.

This asparagus and fried egg panini is essentially a grown-up riff on grilled cheese that we’d happily indulge in every single day—morning, noon, night, and anytime in between. Creamy Taleggio cheese, a pile of peppery arugula, perfectly tender spears of asparagus, and an oozing fried egg are smooshed between slices of crusty toasted bread for a stack that can only be described as sandwich nirvana. And because there’s green stuff in it, we’ve deemed it healthy. We don’t see how this panini isn’t a win.–Angie Zoobkoff

*How To Select Asparagus

When you’re perusing asparagus for this panini recipe, whether at the farmers market or produce aisle, you want to think like Goldilocks. Not too thick. Not too thin. Juuuuuuust right. Because jumbo asparagus spears can be tricky to get perfectly tender all the way through and make for a towering sandwich that’s a little too unwieldy to eat in polite company. Conversely, pencil-thin spears easily turn to mush during cooking and will likely end up getting lost in your sandwich. So opt for spears that fall somewhere in between. If your only option is super colossally thick spears, go ahead and buy a bunch but cut each spear in half lengthwise prior to cooking.

As for how to cook the asparagus, by all means follow the instructions below or simply grab those leftover spears of grilled or roasted or steamed asparagus from supper the night before and consider it an excuse to make yourself this panini. 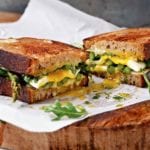 This asparagus and fried egg panini is made from thickly sliced sourdough bread stuffed with grilled or sautéed asparagus tossed in a lemon dressing, a fried egg, Tallegio cheese, and arugula. Then the whole shebang is grilled in butter until toasty and golden brown.
Cara Mangini
Prep 25 mins
Cook 10 mins
Total 35 mins
Lunch
American
2 servings
5 from 1 vote
Print Recipe 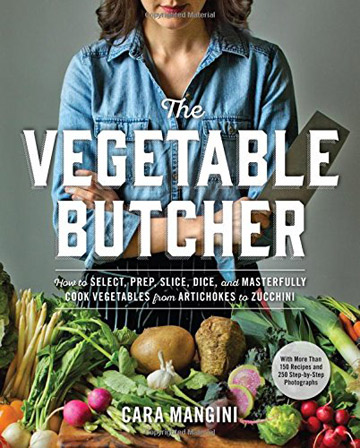 This asparagus and fried egg panini was the perfect spring bite! You’ve got crunchy asparagus, creamy Taleggio, and a bright lemon vinaigrette. What’s not to love? I used sourdough bread. It took two minutes per side for most of my asparagus. The bigger spears took an extra 2 minutes. I wanted my eggs over medium so I cooked them for 4 minutes and flipped them after 2 minutes.

This asparagus and fried egg panini was the best sandwich I’ve had for a very long time. Runny egg yolk, melty cheese, crunchy asparagus, a bright citrus dressing, what’s not to love? I skipped the mint as I have a sensitivity to it. I used a thick crusty white bread. Taleggio wasn’t available but fontina was suggested as a substitute and this worked well. My only issue was that the cheese wasn’t melted by the time the bread was browning. I’m not sure if it’s because I had to use fontina or if perhaps it would have been better to shred the cheese instead of “dotting” it. I pulled the skillet off the heat, and covered it for 2 minutes, which allowed the cheese to mostly melt before assembling the sandwich.

This panini is great. The flavors are nice and well balanced. The Taleggio is expensive but perfect for this use because it melts so quickly and well. We didn’t drizzle any extra of the marinade and it was fine. The servings probably depend on the size of bread that you choose. Our loaf (pain au levain) was small and so we fit the small spears into it with everything else pretty well.