This potato and chickpea stew, made with potatoes, canned chickpeas, tomatoes, bell peppers, and spinach, is a hearty and healthy and vegetarian weeknight dinner that’s both easy to make and pretty darn satisfying, too. 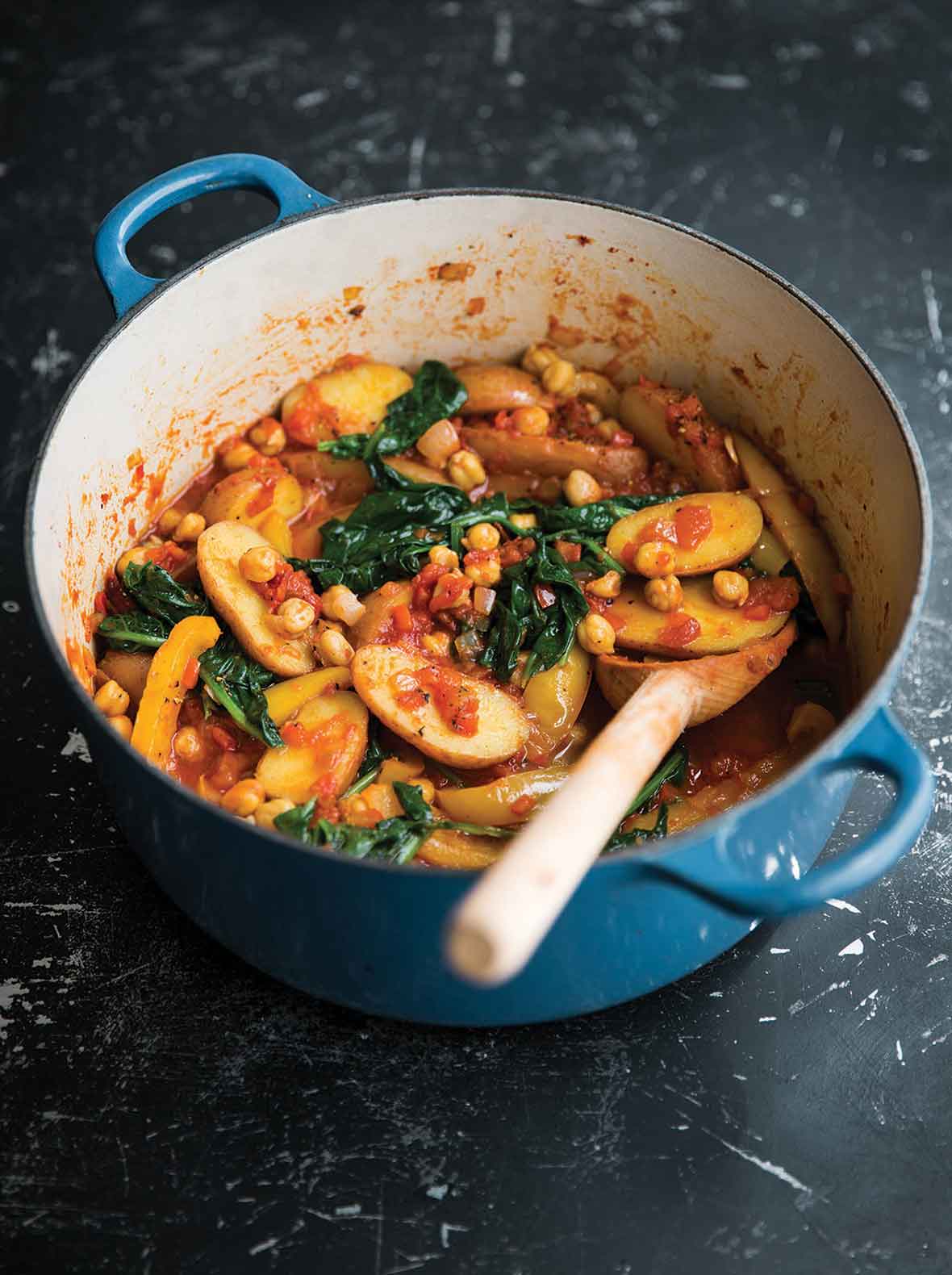 Adapted from Deborah Madison | In My Kitchen | Ten Speed Press, 2017

This potato and chickpea stew from Deborah Maven is a Spanish-inflected one-pot supper that gently simmers potatoes, peppers, tomatoes, and chickpeas until tender in a broth that’s spiked with paprika and tomato. It’s then finished with spinach and a dollop of Romesco sauce. It’s hearty and remarkably satisfying on many levels (including for the person doing the cooking and the cleaning up), so much so that you may even forget it’s vegetarian and healthy.  Originally published April 28, 2017.–Angie Zoobkoff 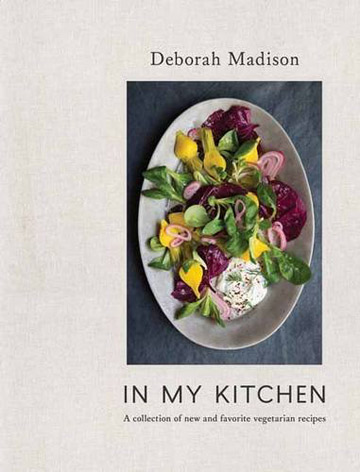 If you’re using fingerling potatoes, scrub them and then halve them lengthwise. If you’re using round potatoes, scrub them and quarter them.
In a large skillet or a Dutch oven over medium heat, warm the oil. When it’s hot, toss in the onion, saffron threads (if you’re using smoked paprika instead of saffron, wait and add it later), diced and sliced peppers, and potatoes. Cover the skillet or Dutch oven and cook, turning or stirring the vegetables every now and then, until the potatoes are almost but not quite tender, 15 to 25 minutes, depending on their size. Stir in the garlic and season with 1 teaspoon salt and plenty of pepper.
Add the sweet or hot paprika (plus the smoked paprika, if you’re using it), parsley, and sherry. Cook, uncovered, until the juices in the pan have reduced and are thick and syrupy, 2 to 5 minutes.
Dump in the drained tomatoes (but reserve the juices), chickpeas or beans, and enough of the reserved tomato juice plus to cover the ingredients. If necessary, add water so the ingredients are submerged. Cover and cook over low heat until the potatoes are completely tender, 5 to 20 minutes more, depending on the size of the potatoes. Taste for salt and pepper and add more, if needed. The stew will be rather soupy.
Stir the spinach into the stew and gently cook until it wilts, about 3 minutes. (Alternatively, if you prefer, you can gently sauté the spinach in a little olive oil over medium heat until it wilts and then stir it into the stew.)
Divide the stew among bowls and drizzle with the extra-virgin olive oil. Serve immediately with a dollop of romesco sauce, if using.
Print Recipe

This potato and chickpea stew was just what the doctor ordered to chase away the winter blues and usher in spring! The vegetables all retain their individual flavors but come together harmoniously with the assistance of sherry, tomatoes, and lemon juice. My dining companion raved more about this soup than any others I’ve made in the past couple months, and I agree. It’s both fresh tasting and comforting. And it’s finished in an hour.

I could not see a benefit to sautéeing the spinach in a separate pan and then adding it to the soup at the end, especially when the photo shows it fully incorporated. Therefore, I just added the baby spinach to the soup for the final 3 minutes to let it wilt. The final result was good, but I thought that it was missing something. I added 1 tablespoon lemon juice and it really it brightened up. I would say that lemon juice is essential to finish this dish. As with any stew, it’s always better the next day (or 2 or 3 if it lasts that long), but I think it’s especially true with this soup because I didn’t cook it for the extra 10 to 20 minutes at the end to meld those flavors (for fear of the potatoes falling apart). I couldn’t find fingerling or Yellow Finn potatoes at the grocery, so I used small Yukon Gold potatoes instead and cut them into eighths. I did not add romesco sauce or saffron.

This potato and chickpea stew is a great stew with Spanish flavors that comes together pretty easily and makes for a delicious one-dish meal.

The dish had just a very mild warmth to it. The suggested romesco sauce was a good addition, adding both richness and depth to the flavors of the stew. I used young yellow Finn potatoes and saffron, not smoked paprika, and hot paprika rather than sweet. My grocer was out of bunches of spinach so I used a 5-ounce box of baby spinach.

If there were one thing I'd change, it would be to reduce the total amount of bell peppers, but my husband liked it using the quantity given, so it's really a matter of preference.

This potato and chickpea stew is a straightforward and satisfying stew that works well even on a weeknight.

The ingredients for this are available year round, although fresh tomatoes at the height of the season might make it even more special.

I used chickpeas from a batch we had prepared the day before, so I had lots of nice chickpeas and their cooking liquid to use for the broth. Fingerling potatoes were available in a local market. With a couple of minor adjustments, this all came together in an hour and a half. The prep is the main work—chopping, slicing, dicing, measuring, and setting up mis en place took maybe 40 to 45 minutes. I used only 1 red bell pepper and 1 yellow pepper, but actually think I would have found this too sweet if I had 2 reds. For parsley, a combination of cilantro and mint was compatible with the chickpeas.

The most challenging item was that I didn’t have sherry on hand, but approximated it by using 1/2 ounce each of brandy and peaty whisky along with 3 ounces Chardonnay, which approached the fortified flavor of sherry (and the Scotch is often finished in sherry casks), and this backed up the use of smoky paprika (rather than saffron). After tasting to check the seasoning before serving, I added an extra 1/2 teaspoon of smoky paprika and an extra grind of pepper.

Plan on a good handful of spinach per person (40 to 45 grams) and you’ll be fine. I sautéed it just until it was wilted yet remained bright green, and I think you would want to do this immediately before serving. I added a drizzle of olive oil over the spinach (I didn’t make the romesco sauce but will plan for that another time). It’s a good dinner that just happens to be vegan, although no one in my house would object to some crisp Spanish chorizo croutons on top! While it is relatively virtuous, it doesn't feel too lean or too overly health-conscious, even though this probably would appeal to some folks for exactly those reasons. Foremost for me was that it taste good, and it does.

This potato and chickpea stew is an instant favorite. It’s very satisfying and there are so many layers of flavor here that you won’t miss the meat (although chorizo would go quite nicely for a non-vegetarian version). The peppers and onions become very velvety and sweet throughout the cooking process. You can very distinctly taste the two different types of paprika and the sherry. It’s a very well-balanced stew.

I invested some time and used dried chickpeas, reserving the cooking liquid so that I could use it in the stew. The cooking instructions were very accurate—I used fingerling potatoes and they became pretty fork-tender by the end of the first 20 minutes of cooking with the lid on. I got a kick out of the colors in the first step because my fingerlings included some purple and pink ones, so between the pepper colors, and then later the parsley, it all had a nice confetti effect.

I ended up adding 1 1/2 cups liquid before adding the spinach—half was the chickpea liquid and half was vegetable stock. If you want a stew that’s a little soupier, you could go up to 2 cups total. I didn’t buy a bunch of spinach for finishing, I just used a box of baby spinach (142 grams), sautéed it in some oil, and served it separately. This dish would go nicely with some whole grains, whether on the side or mixed in, such as farro, wheat berries, whatever is on hand. Makes for a nice, complete, and healthy meal!

I see this potato and chickpea stew as a great base recipe. I love smoked paprika, so I used that option in the stew and loved the finished taste. It tastes delicious as it is, but while eating it I kept thinking about other things that I could add the next time that I make it. The sautéed spinach was good, but if I make this again, I'd probably just toss it directly into the stew rather than sauté it separately.

This recipe is one of those in which the flavors just build and build as you add each new ingredient, and when it all comes together, wow. It's so simple but your friends will think you've been slaving over the stove all day!

The flavors—onion, garlic, saffron, peppers, paprika, sherry—blend really well together. Each bite reveals something new. Plus you get that nice pop from the chickpeas, a little crunch from the spinach, tartness from the tomatoes, and the creaminess of the potatoes. And then top it off with a dollop of romesco sauce. (Don't leave out the romesco sauce! That recipe is spot on.) It's a complete meal all by itself.

The added bonus was that the dish got even better on the next day after all the flavors had even more time to marinate together.

This was a great recipe. I was surprised at its simplicity but it has some real nice complex flavors.

My Dutch oven has a self-basting top so I was able to cover and forget about it, which means I didn't check it often. The timing seems to be right. It served the two of us for dinner with enough left over for lunch the next day.