Adapted from Ted Allen | The Food You Want to Eat | Clarkson Potter, 2005

You’ve planned a dinner at home for a new love interest. The date is set, you’re already relishing the menu you’ve devised, and you give a call just to check whether the candidate is violently allergic to anything you’re planning to cook. And then you find out that not only do you have a vegetarian on your hands but a vegan — someone who not only doesn’t eat meat but also eats no dairy, eggs, or fish. What do you do? Cook this! The crazy thing is, it’s really, really delicious. I make it all the time, even when no vegans are coming over. Serve it with a salad, and it’s dinner. You can assemble it ahead and refrigerate, then bake.–Ted Allen 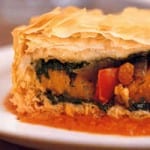 When you find out that not only do you have a vegetarian on your hands but a vegan — someone who not only doesn't eat meat but also eats no dairy, eggs, or fish. What do you do? Cook this! The crazy thing is, it's really, really delicious.
Ted Allen
Prep 1 hr 15 mins
Cook 1 hr 30 mins
Total 2 hrs 45 mins
Sides
American
6 to 8 servings
526 kcal
5 / 2 votes
Print Recipe 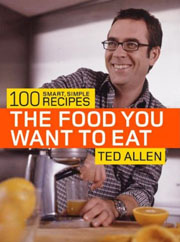 The first time I made this, I thought the recipe used an excess of oil. I made it again as a dish for Thanksgiving and used about half of the oil called for in the recipe and the result was excellent. I love the filling in this recipe. The most delectable feature of is the sweet and seductive way the roasted vegetables came together with the spinach, hint of ginger, earthy spices, chewy raisins, and crunchy walnuts. The baked phyllo lends a flaky, crisp encasing that contrasts with the tender filling for a dish that leaves you wanting more. A nice side dish or a filling entrée.

Fear of phyllo? Don’t let that stop you from trying this recipe, which is a winner. The pie is packed with super-healthy vegetables whose deep, natural flavors come out in roasting. The final taste of the dish is enhanced with a balanced combination of sweet and spicy seasonings: ginger and cumin add a delicious heat to the sweeter touch of cinnamon and raisins. Walnuts provide a pleasing crunch as well. The tomato sauce, in my opinion, is optional. One thing was certain: no need to worry about leftovers.

A couple of tips to help the phyllo-shy cook: Working with phyllo can be tricky; don’t be a perfectionist. One thing that helps is to lay a piece of parchment paper on top of the flat sheets of dough, then put a lightly dampened kitchen towel on top of that. Keep the sheets covered this way as you work on assembling the pie; this prevents the paper-thin phyllo from drying. If you get a “bad” package of dough, with sheets already stuck together—or if you tear the sheets, which is easy to do—just proceed the best you can. I have on many occasions had to just make a patchwork of dough under and on top of the filling. It may not look as pretty, but it tastes just as good.