This naked wonton soup is simply the best parts of wonton soup–the insanely aromatic and flavorful filling of ground pork, ginger, garlic, soy sauce, and sesame oil–simmered in chicken broth minus the wonton wrappers. A keto-friendly, low-carb, gluten-free riff on the Asian classic.

Naked wonton soup. Now that we have your attention, we’d like to draw your awareness to this blissfully (if decidedly untraditional) low-carb riff on the classic Asian soup which skips the fussy wrappers and instead gently simmers gingery pork meatballs directly in chicken broth spiked with soy and sesame oil. Gluten free and keto friendly and delicious and fast and kid pleasing.–Angie Zoobkoff 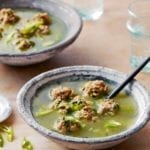 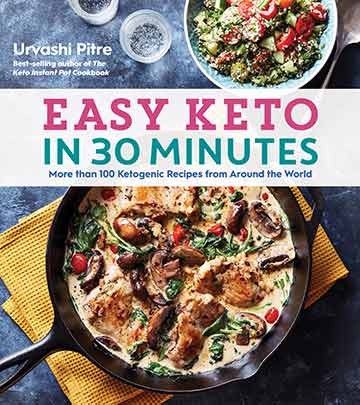 For the pork meatballs

This was super fast, super easy, and super satisfying! In the middle of a hectic morning of holiday party prep, this recipe came through in my email. It called my name! It took me 15 minutes from start to finish and is now going in my belly as a truly delicious lunch on a jam-packed day. That’s how fast and easy this soup is, that it can be made while doing a million other things at the same time without even really a thought.

While I measured the amounts, this is the kind of soup that’s forgiving. Use more or less of whatever additions you like—I used sautéed shiitakes and a teaspoon of Tuong Ot Toi Vietnam Chili Garlic Sauce. The seasoning level was on-point even before the chili garlic sauce, but now it jumps happily in my mouth!

The addition of soy sauce and sesame oil to my favorite homemade chicken broth was a lovely addition. The meatballs were flavorful and made this a tasty and hearty soup. The ground pork meatballs were delicious.

If you have prepared chicken broth, this flavorful and satisfying soup can be ready in about 35 minutes. I was pleasantly surprised that the meatballs took only about 4 minutes to cook. I added chopped bok choy to round out the flavors and provide a vegetable to the soup.

This recipe made many more meatballs than I needed, so I froze almost half of the meat for a future soup.

This wonton soup with pork meatballs was cozy and warming, just what I needed since I was fighting a cold while I made it. The meatballs were tender, flavorful, and really juicy since they were cooked right in the broth.

I did miss the wonton wrappers when I was eating it, but I admit this probably only took 1/3 of the time as usual to prepare since I wasn’t filling, folding, and sealing individual wontons. I thought only 4 cups of broth wasn’t enough given how many meatballs the recipe made, so I ended up adding some water to the pot. I thought the broth was delicious.

I used regular chicken broth and I didn’t find the final product to be overly salty, just flavorful, but for someone more salt-sensitive, low-sodium broth is probably better.

I used about an inch of peeled fresh ginger. I have found that chopping it finely at the same time I chop the garlic prevents the knife and my fingers from getting all sticky from the garlic.

The meat mixture was quite loose, definitely looser than a normal meatball or meatloaf mixture. Despite this, when I scooped the meat directly into the broth, the balls stayed intact well and kept their shape.

The top 1/4 of the meatballs were not covered once all of them were in the broth, so I added about 1 cup water to cover them. I also put a lid on the pot to keep the steam in.

Winter is long where I live so a new recipe for a quick soup is always welcome in my kitchen. And this one certainly has made the list of keepers for its speediness, effortlessness, and flavor. Really, you’ll think of this delicious, heady soup when you want to cure a cold in 15 minutes.

The ginger, garlic, and scallion trio is wonderful with the pork (such tender meatballs by the way, almost fluffy) and the sesame oil perfumes the broth beautifully. My pantry is never without these aromatics or store-bought chicken broth (did I say winter is long here?), leaving just ground pork on my shopping list for my commute home.

I mixed the pork and eggs right in my 4-cup measuring cup after measuring the chicken broth, then using a heaping scoopful (#60 disher or about 1 tablespoon) I started dropping the mixture into the simmering soup. I had some baby bok choy in the fridge so I sliced it and tossed it in the soup with the pork.

You could add anything that cooks in 5 minutes—that’s how long it took for the pork—and you’ll be sitting down for a nourishing soup dinner in no time at all.

This soup was so easy to make and so much fun to eat, I had to give it a TC, even if I’m going to have to make more broth to accompany the wontons that we did not eat the first night with the first batch of broth.

This was such a fast and easy recipe and it results in a soup with lots of depth of flavor. This is the soup you want when you are sick or as a first course to an Asian dinner or just paired with a simple salad.

I used ground pork and made the meatballs around 1 inch in diameter, which gave me almost 2 dozen meatballs. There are just two of us so it was nice for each of us to have the leftovers for lunch the next day. I think the suggestion to double the meatballs and freeze a batch is brilliant and I will definitely do this next time. I also might add some lemongrass to the broth to give it a little brightness.