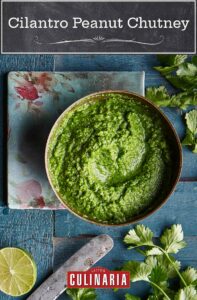 Cilantro peanut chutney is a perfectly fresh and herby addition to anything you choose to dip in it. A mix of cilantro and mint is given a boost by garlic, onions, green chiles, and peanuts. Yes, peanuts. It’s fantastic, trust us.

I have shared a coriander chutney recipe in every cookbook that I’ve written. This clearly illustrates how big a fan I am of this simple yet powerful little chutney and also that there are many different ways of making it. I have a small bowl of this chutney in the refrigerator at all times, and you’ll be surprised how amazingly well it goes with absolutely anything you are eating.–Chetna Makan 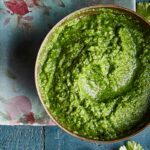 We know that cilantro can be a super divisive ingredient, especially if you’re part of the population (nearly 25%) that’s predisposed to tasting soapy aldehydes when you eat it. But lots of people love it and use it in many, many ways. Cilantro is what we, in North America, call the leaves of the coriander plant. So…coriander is essentially cilantro seeds. All parts of the plant, with the exception of the flowers, are used in cooking. Cilantro root is widely used in Asian cooking and the leaves and seeds are used around the world. Cooking the leaves does reduce their pungency so if you’re still thinking about giving it a try, that’s a good place to start. 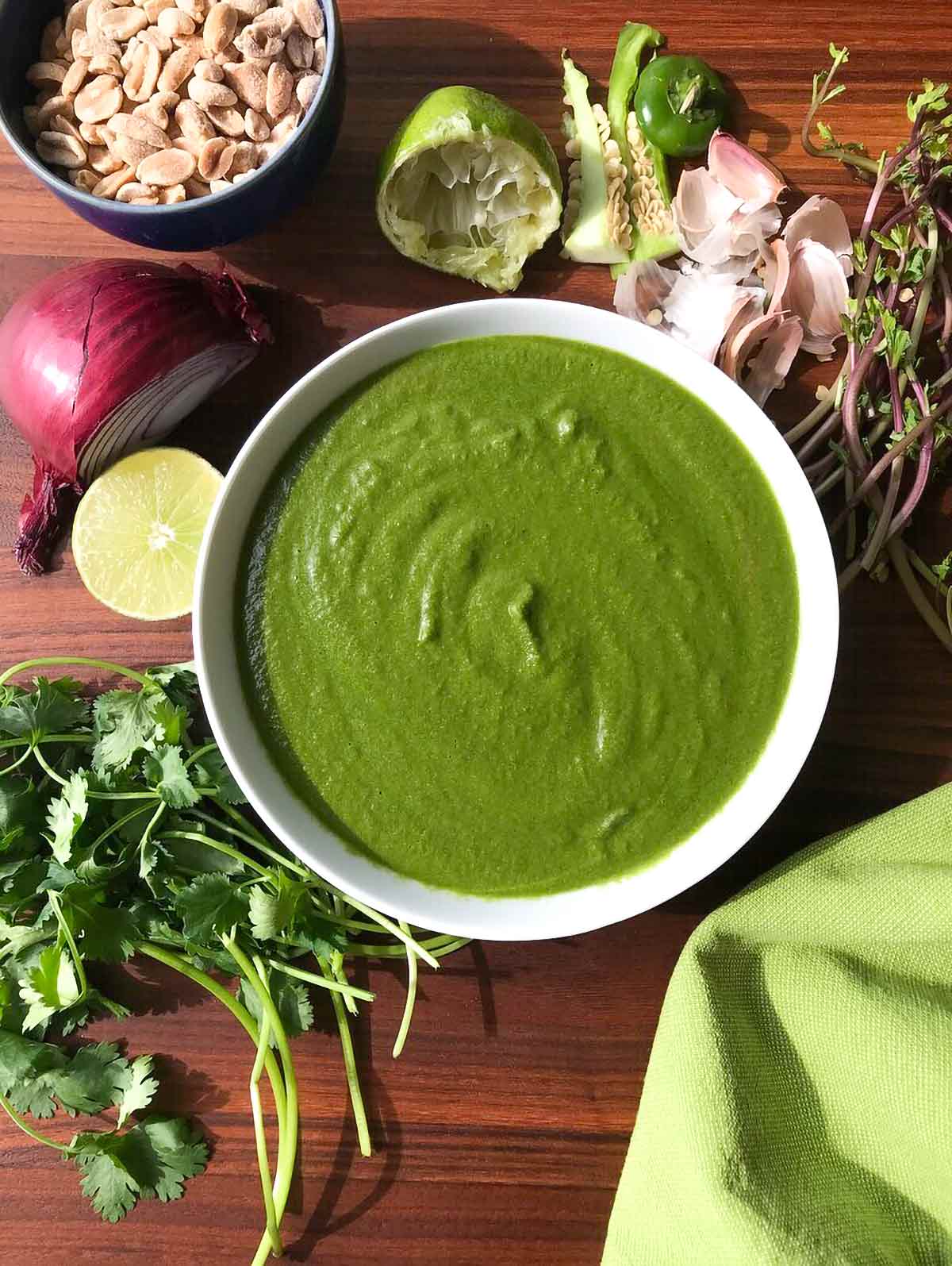 This cilantro peanut chutney is bright, complex, and totally addictive. We enjoyed it so much that we ate it with warmed naan the next day as a snack.

From start to finish, the recipe took me 35 minutes (most of which was time spent picking leaves.) In the future, I will shave the top of my cilantro bunch into my blender. This will save a bit of time and produce less waste. I find the delicate tops of cilantro stems flavorful and edible.

I made the recipe as written and I chose to remove the stem and seeds from my green chile. After blending, I found that I wanted a bit more salt and lime. I suspect each batch will vary a bit depending on the strength/freshness of the aromatics, herbs, etc. This is easily resolved. I added a pinch of salt and lime to taste.

I kept our chutney in a glass jar in the refrigerator. On day 3, it was noticeably less vibrant. The taste had mellowed and become grassier, and the color had darkened. My solution for this is that going forward I’ll just eat it within two days—and that won’t be a problem. We tried this (separately) with chicken, naan, and eggs before we ran out. It’s so good you could eat it on a piece of wood! I can see myself stirring this into soups, putting it on rice, dipping veggies i

This cilantro peanut chutney is a wonderful sauce to have on hand and it goes well with so many things! And it couldn’t be easier to make. We ate this on fish, chicken, vegetables, potato and on top of an omelet and it was delicious on all of the above. The herbs and tiny bit of spice will really liven up your food.

This cilantro peanut chutney is a winner. It’s simply beautiful, with a decidedly fresh, summery taste, no matter the time of year. I sampled the finished chutney immediately after blending and it was delicious. But, even better the next morning. The mint had mellowed a bit, but the cilantro was still not there as much as I would like. The flavors were still bright and the color is gorgeous. I can’t wait to make this when my orange mint breaks dormancy.

I used it with an inside-out cheese burrito filled with scrambled eggs, rice, and zucchini; as a dip for roasted potato wedges; cumin-scented grilled lamb chops; on grilled cod; on my avocado toast, and I’m still working my way through it and… okay, we loved it!

This is a recipe that I am very familiar with and I guarantee that a good cilantro peanut chutney is a great addition to so many dishes! It’s so vibrant, refreshing, and easy to make.

This cilantro peanut chutney is verdant and layered with flavor: bright freshness from the mint and cilantro, a pop of acidity from the lime, a little boldness from the garlic and onion, and finally a background accent from the peanuts that’s almost hard to identify but does a world of good to bring everything together. I was surprised that there’s no oil involved, but it definitely isn’t necessary.

The recipe is ridiculously easy to make and to customize according to taste, and it’s also quite generous in yield. We’ll be using this with naan, with plenty left-over for stirring into basmati rice, topping on scrambled eggs, or spreading on some hearty roast beef or turkey sandwiches.

When I prepare this again, I’ll likely make a few adjustments. I’ll use a medium onion for a little more presence, I’ll use peppers with a little bit more heat, if possible, and I’ll keep a whole lime at hand for pulling up the seasoning at the end, if necessary.

While this doesn’t dethrone Meera Sodha’s Lilli chatni from “Made In India” as my weekly go-to, this cilantro peanut chutney is a seriously good chutney with a strong punch of brightness from the mint. I’m quite impressed that it has managed to keep its vibrant color over several days, as I’ve used it on everything from naan to roasted vegetables, grilled chicken to fried eggs. Personally, I think I will use a little less onion next time (the allium flavor was a bit strong, though I only seem to be able to find giant onions so that could be my fault) and a bit more lime juice to balance out the sugar.