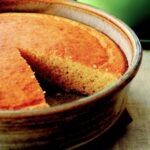 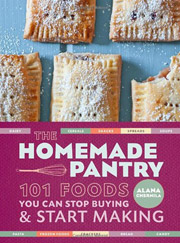 This recipe does exactly what it promises and serves up comforting cornbread. It’s easy to make and you’re left with a fragrant kitchen and a pan full of goodness. I particularly liked the addition of maple syrup. That sweetness plays off against some fried chicken and a lovely mushroom gravy quite, quite wonderfully.

OK. I admit it. I just finishing pigging out on this cornbread—just couldn’t stop. This may just be my go-to cornbread recipe from now on. It simply could not have been improved.

First of all, it was dead easy to make gluten-free. I just used a gluten-free AP blend. There is absolutely no way one would be able to tell it is gluten free.

Second, the maple syrup added such a lovely maple-y flavor. Usually I have cornbread with maple syrup drizzled over it, but I did not feel the need this time.

Third, this would go amazingly well with a host of things. What did I have it with? Apple cider, because apple and maple have an affinity for one another. Lashings of butter went on one piece, apple butter on another, and raspberry jam on a third. All delicious, but the apple butter was my favorite. Normally we would eat it with chili, braised bean and chorizo dishes, beef stew, as dumplings with chicken, or even as a stuffing in roast chicken or Cornish game hens. But today was simply a cornbread day without all that. And now that the pan is a third empty, I am pleasantly full.

What makes this recipe different from most of the cornbread that I’ve made before is the extra sweetness that comes from the maple syrup. While the sweetness is balanced by the buttermilk tang, it didn’t work as a side with the smoky and spicy chili we ate with it. The flavors seemed to compete more so than complement. Had the cornbread had bacon or chilies in it, it may have worked better.

But this recipe is still a keeper. When we had the leftover cornbread the next day with breakfast, that’s when the appreciation for this recipe kicked in. The maple syrup sweetness went well with the turkey bacon and a side of fresh blueberries and this time, the cornbread was a hit!

While I’m not normally a fan of cornbread, I found this recipe to really work well. As I was gently stirring the wet ingredients into the dry, the maple aroma filled the kitchen, and when we pulled the pan from the oven, we had a tender, moist, buttery cornbread. It had a touch of maple flavor, but overall it tasted more savory than other cornbreads. It is truly excellent eaten warm. This recipe produces a fantastic cornbread.

A passport back to the States for me! Now living in India and surrounded by so many flat breads, I’ve forgotten about this delicious American classic! I absolutely loved this recipe. The texture, taste, time of cooking, and the simplicity of it are all simply divine!

I served the cornbread with rajma (curried kidney beans) on Tuesday. On Wednesday I served the yummy corn bread with sautéed shrimp with a sofrito topped with chopped cilantro and scallions. And on Thursday had it with a couple fried eggs topped with a homemade roasted chili salsa. HEAVEN!

I loved that this cornbread was not just delicious but also fast and easy. It was quickly inhaled by everyone in my family, accompanied for some with honey and, for others, with butter and rosemary salt. I would make this again in a heartbeat, not only to eat by itself but as a base for other recipes that call for cornbread.

This recipe was very simple and really quick to put together. The maple syrup gave it just the right amount of sweetness, whereas the buttermilk added tanginess and tenderness. The bake time was right on. It was a little crisp on top and moist inside.

I served it with some maple butter I made by whisking pure maple syrup into some softened, unsweetened butter. Simply delicious. Would be wonderful with a bowl of chili, a slab of ribs…or spread some jam on it and enjoy with a cup of tea.

This is a cinch to make. The batter was quite sweet to taste; however, once I baked it, I could taste just a hint of the maple syrup. It is more like a cake-like bread.

I discovered that this recipe CAN fail you…if your timer doesn’t get turned on, you move on to other things outside of the kitchen, and, 40 minutes later, you realize you had something in the oven. Unbelievably, the cornbread was still palatable but fairly overdone. I saved that batch for cornbread stuffing.

I gave the recipe another shot on a different night, and I’m so glad I did. It’s an incredibly easy recipe that yields a bread with just the right amount of sweetness to it. This may be my go-to recipe now for cornbread, with easy additions such as Cheddar cheese, scallions or chives, or sauteed and diced bell pepper.

This really is a wonderful and easy-to-make go-to cornbread recipe. I was curious to put this recipe up against my current go-to cornbread recipe from the fantastic Joy of Cooking cookbook. I really enjoyed the maple syrup in this cornbread–I’m used to adding maybe a tablespoon of sugar for that tiny bite of sweetness, but the maple syrup gave it a wonderfully smooth sweetness.

It took exactly 20 minutes to bake through and start to brown slightly around the edges like the recipe reads. I really suggest serving this with a touch of butter–that creaminess goes well with the maple taste of the cornbread.

In response to your question, “How do you like to serve your cornbread?” My response is, “I build the meal around the comfort of the cornbread.” In other words, I think of comforting foods from childhood to pair with the cornbread. What I did last night was pair this with a classic meatloaf recipe, braised greens, and roasted fingerling potatoes. This cornbread would be great with a lot of comforting meals–beef stew, chili, fried chicken….or by itself for breakfast, in my opinion!