Congee, or jok plaw, is an easy southeast Asian comfort food made with rice and ginger and whatever toppings you like though we’re partial to scallions, cilantro, and peanuts. Here’s how to make it.

“This is a gentle and comforting congee that heals and salves the soul. All is forgiven or forgotten after eating this suave silken potage. It is eaten for supper, a dinner alone or occasionally for breakfast. It is especially kind to those who are feeling unwell. Once done, it’s ready to use as a base for other, more complex congees. [Editor’s Note: And by “complex congees,” the author means those to which any number of things have been stirred in, whether scallion and cracked black pepper and a dash of soy sauce and a raw egg stirred in just before serving, as in the photo above, or shredded pork and and black pepper or shredded chicken and ginger or a sprinkling of peanuts or, well, just about anything, really.] Plain congee is really invalids’ food, but Thais and Chinese love its bland taste and easy-to-digest texture. Please note, many Chinese congee recipes use chicken stock in place of water. You can do that if you please. I suggest watering it down slightly if it’s a rich broth.–David Thompson 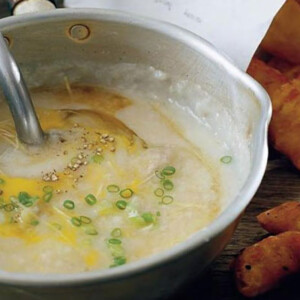 Congee, or jok plaw, is an easy southeast Asian comfort food made with rice and ginger and whatever toppings you like though we’re partial to scallions, cilantro, and peanuts. Here’s how to make it.
David Thompson
Prep 5 mins
Cook 1 hr 55 mins
Total 2 hrs
Mains
Thai
4 to 6 servings
338 kcal
4.67 / 3 votes
Print Recipe 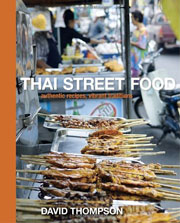 *What You Need To Know About Broken Rice

We’re going to borrow author David Thompson’s definition of broken rice, which is, as he says, “simply the grains of rice that break and shatter during the milling process.” In the eyes of some, these broken kernels are damaged goods, separated from the whole grains, as it can no longer be used to make steamed rice. Thompson explains further, saying “the starch spills out of the broken grains as they cook, making a gluggy, gluey mass. Terrible for steamed rice, but wonderful for soup! Some Thai cooks prefer new season’s rice for congee, saying it makes a more supple soup, while others incline to old grains, saying it has more character and aroma. I plump for the latter. Broken rice is easily bought in Thailand, and is usually available in Chinese grocery shops. It is also very easy to make: just lightly grind or pound the required amount.” If you just don’t have it in you to trek to Chinatown or pound rice, you can still partake of congee. Just use regular whole-grain rice and simmer it a little longer as mentioned in the recipe above.

Goopy, soothing, and comfortingly bland, congee is Asia’s contribution to the great nursery food canon. Eaten on its own, it’s on the one-dimensional side, but it makes a terrific vehicle for a host of more dynamic ingredients. I ate mine with shredded ginger, chopped Spanish peanuts, and some soy sauce and it was wonderful.

I must admit that I cheated a bit with this recipe; instead of using broken or even plain white rice, I used some black wild rice that I had on hand. It worked well, but as the recipe suggested it would, it took more than twice as long to cook. Still, it was worth the wait, and I’ll doubtless have plenty of opportunities to make it again during New York’s long winter.

This is exactly what congee should be. Simple, warm, and satisfying on a cold day. This is a great recipe base to start from, and you can add anything you’d like to top it. I like a little bit of spice in my food, so I added a touch of Sriracha after trying out the recipe as written. I didn’t use broken rice, but it still cooked down in the time recommended for broken rice. I added about 2 additional cups of water as well.

I’m a little partial to this recipe, as it evoked so many feelings of comfort from my childhood. I have only cooked this twice, both times years ago. I was glad that testing gave me an opportunity to try it again. It worked exactly as written and was so, so easy. It’s not fancy, but I did as my mom does and served it with shredded chicken, thinly sliced raw cabbage, lots of scallions, and freshly ground pepper. It’s perfect for cold winter days in the Midwest.

This is a very neutral and soothing food. Like grits, it act as a vehicle for additional flavors. As presented in the recipe, the accompanying garnishes keep the dish light and herbally medicinal, perfect if you have the sniffles.

Since I had leftovers, I thought a spicy variation would be great for a hearty lunch or dinner. Taking my cues from the banh mi sandwich, I cooked some ground pork, Sriracha, and other spices to make a quick accompaniment to top the congee. This proved how versatile congee can be and when you’re feeling better the next day, leftovers can be given many new forms.

Testing tips: the heat under pot can’t be too low. As Julia Child would say, “nary a bubble should form.” You will need additional water, especially if you can’t get your heat down really low. Keep a good eye on the pot.

This recipe for congee is a solid base recipe for an easy to digest, filling, and comforting meal. What I liked about this recipe is the flexibility to make one bowl different from the next. I replaced half of the water with low-sodium chicken stock to start with a more flavorful base. My tasters customized their bowls with additions including roasted seaweed, katsuobushi, egg, scallions, tofu, ginger, cilantro, and Sriracha. We all liked having something fresh like scallions or cilantro to brighten the flavor.

I used a short-grain rice for the congee and substituted chicken stock for the water. I wasn’t really clear on what the consistency should be, so I cooked it until it was still moist but there was no liquid remaining (about 75 minutes). We added our own garnishes of ginger, scallions, cilantro and peanuts, and also some spicy Thai red chile sauce. This worked as written and was perfect for someone with a cold!

Prepared as is, this is a pretty bland dish. But that’s the point. It either serves as a comfort when you just need something plain, or becomes the canvas for other ingredients. What’s so appealing to me about this recipe is the consistency of the end result—so smooth and soft and, well, comforting.

I halved the recipe and it worked just fine, still making plenty of congee (6 cups or more) for my needs. I pulsed the rice in a spice grinder to give it the broken effect. After the soak, I cooked it for about 30 minutes, adding more water to keep it very brothy. I also wish the recipe gave just a little bit more of a clue as to the consistency— it said to cook “until the rice grains have almost dissolved,” but I would have liked a visual cue as well. I ate it with soy sauce, grated ginger, chopped scallion and cilantro and some chopped Japanese pickles I had on hand. Perhaps not very traditional, but still tasty. In the morning, the rice absorbed most of the rest of the water, but it was still very soft and tender. I had as above for breakfast, minus the pickles and with the addition of a hard-boiled egg. Will definitely make again.

Growing up in a congee-loving house, of COURSE I had to try this recipe. I had never thought to use broken rice before, but I did appreciate the shorter cooking time, and I’ll remember that shortcut in the future. I didn’t really see any use in soaking the rice for 2 to 3 hours before cooking. There was no difference in texture or aroma that I could discern. The Cantonese method is to soak the clean rice with a drizzle of oil and a dash of salt for 20 minutes before cooking, and I don’t notice much of a difference with that technique, either. The results are similar if you add the oil and salt during or after cooking as well. Overall though, this recipe contained a clear set of instructions for the novice congee-maker.

Note though: Plain congee is VERY bland food, and because all the rice starch has been cooked down, it can be very sweet as well. If you’re not using it as invalid food, be generous with the salt and add toppings (thinly sliced pork or chicken, salted eggs, pickled mustard greens, etc.).

In the past, I have tried to make “quick” versions of congee, and to be quite honest, they were less than gentle and comforting. It seemed that it would be worth the effort to lightly grind the rice to make the dish more silken, and believe me, it was!

I had some very rich chicken stock on hand, so I watered it down, not wanting it to dominate the flavor of the soup. If you aren’t feeling well and want this to be easy to digest, I would suggest starting off sparingly with the garnishes, as you can always add more later. To me, this is the ultimate in comfort when the weather is dreary and you don’t feel well. This is the next best thing to going home and having Mom spoil you with all the old favorite foods. A keeper!