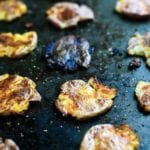 These crispy smashed potatoes are easy to make, kids love 'em, and they're suitable for the gluten and dairy-free folks at your table.
Prep 15 mins
Cook 35 mins
Total 50 mins
Sides
American
4 to 6 servings
298 kcal
5 from 1 vote
Print Recipe 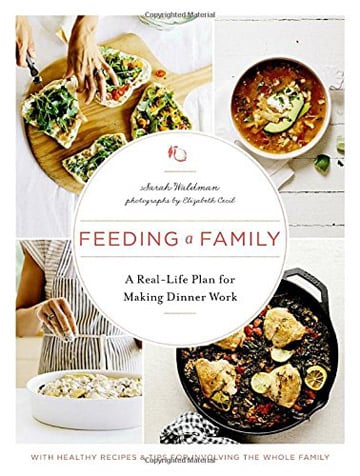 Salt and Vinegar Easy Smashed Potatoes If you’re anything like David and adore salt-and-vinegar potato chips, which are so popular in New England, sprinkle a bit of malt vinegar over the potatoes before sliding them in the oven. Trust us: You’ll be able to woo potential enamorados with this–they’re that good. Easy Cheesy Smashed Potatoes If you can’t seem to ever get enough cheese, finely grate some Parmesan over the potatoes just before the last flip. And don’t forget to line the baking sheets with aluminum foil before you put the potatoes on them so you don’t have to scrub nubbins of stuck-on cheese from your pans after dinner.

Any recipe that mentions “French fries” and “addictive” in the introduction already has a lot going for it, in my book. And it just got better when I learned these are truly smashed potatoes, not the rough, fork-mashed ones that most people think of when they think of smashed potatoes. Smashing those little red potatoes was one of the funnest kitchen exercises I’ve done in a while. And if I had to get out some aggression, well, it would have been even better.

The high-temperature roasting method really crisped the potato flat sides nicely while the olive oil kept them from sticking to the baking sheet. In many cases, simple is better, and that was true here. The olive oil and a little salt were all that was needed to take these crisp bites to another level. I think the recipe made 6 servings but it was hard to tell because 4 of us ate them all up. Addictive indeed.

Interestingly, I used 2 baking sheets—one dark and one light—and the potatoes roasted in the dark pan came out a little crisper and browner than the others. Rest assured, they were all delicious.

I loved these easy smashed potatoes. Soft and crispy and dippable. They could stand in for chips or french fries with a burger or make a meat-and-potatoes dinner more interesting.

I grabbed red-skinned potatoes from the grocery store bin labeled “B-size”, started them in cold water, and once the water was boiling, set the timer for 10 minutes. Don’t skip the 10 minutes cooling after draining; the potatoes dry and then crisp up in the oven. My potatoes were smashed to about 1/4 inch thick, they held together fairly well, with the peaks and valleys all nubbly and the flat spots steamy and soft.

Tear these apart with your fingers, dip, and eat! Generous with the salt, please!

This easy smashed potatoes recipe is a perfect weeknight dish that the whole family can enjoy. They work great as a side dish with dinner or served alongside eggs with a Sriracha ketchup for breakfast. A great versatile recipe!​

These smashed potatoes were kind of crumbly but the combination of the salt and vinegar was just perfect. We ate these right off the pan and made a second batch the next day.

I used the bottom of a juice glass to flatten, once they were out of the pot. I used the author’s suggestion and sprinkled a generous amount of malt vinegar on mine. A few variations I would make to this recipe would be a sprinkle of pepper Jack or Parmesan cheese. You could even add a dollop of sour cream or low-fat Greek yogurt.

Finally! A recipe for the working woman who’s had a rough day. Instead of coming home and taking out my frustrations on 2 mostly innocent cats, I can boil water, drop in some little roly-poly potatoes (one of the cats is a little roly-poly too, but that’s another problem), and less than 30 minutes later take out my frustrations with a crab mallet and some baking potatoes on a baking sheet. Eating these was a lot like eating a non-fried version of boardwalk fries. The olive oil imparted a little bit of crunch while the rest of the potatoes had a more creamy consistency.

I used the smallest potatoes I could find, which were about 2 inches long and 2 inches in diameter. I flattened them to a thickness of about 1/2 inch. I tried these several different ways: salted, salted with malt vinegar, salted with black pepper, and salted with chives. All were good. These would be a good candidate for a loaded potato dish. This dish could also be partially made ahead, with the boiled potatoes cooling their heels in the refrigerator for 24 to 48 hours.

I used a peanut jar to flatten each potato to about 1/4 inch thick. I was cautious with the seasoning and roasted for a further 20 minutes to finish them off. The results were crispy, creamy potatoes that make a nice addition to any meal. What my tasters and I discovered is that these potatoes really need to be seasoned aggressively and I hadn’t used enough of either the salt or vinegar. The next time I would be more aggressive with my seasoning and, of course, make more.

I think 2 sheet pans should do it. We also discovered when I made a second batch a couple days later that these are quite nice when eaten with a creamy ranch dip as a snack. My potatoes ranged between 1 1/4 to 3 inches in size. We got 4 servings the first go round and 2 for the second—it was a tasty snack!

If you tend to love foods that combine creaminess with a little crispiness in each bite, you’ll want to try these smashed potatoes. They definitely satisfy that craving.

It wasn’t until I started to smash them and the less tender ones fell apart, while the more tender stayed in one piece, that I realized there were subtle differences that would influence the end result, though the advantage to things breaking apart was that there were more crisp bits. I flattened the potatoes to approximately 1/2 inch thickness and roasted them for 10 minutes before flipping. Once flipped they required another 20 minutes to reach a crisp, golden brown. Definitely easy to make and delicious.

I used a 1.8 pound bag of Simply Amazing Potatoes Ruby Sensation, which equated to 53 one-inch red-skinned potatoes. I set the boiled potatoes aside in the refrigerator and continued the recipe the next day for dinner. After a couple of quick taps with the flat side of my meat tenderizer, the potatoes were smashed to between 1/4- and 1/2-inch in thickness and perfectly done after the prescribed oven times. I imagine changing this up a bit in the future with garlic-infused olive oil or a sprinkling of fresh herbs or a bit of grated cheese. So many possibilities.

These smashed potatoes were easy to make and tasted great. They smashed really well. They got a beautiful golden brown in the oven.

Simple, delicious, tasty, and perfect year-round! While the introductory note states that these are just as good as French fries, we disagree: these are better than French fries. And they are addictive, as stated. My potato-loving friend, Joseph, could likely eat up the entire batch in one sitting, despite that this recipe officially serves 4 to 6.

If you were not going to make a meal solely of potatoes, there is the question of how these would be served. Despite that we are collectively not steak eaters, that was the first thing that came to mind. A meal of these potatoes with steak and asparagus seems just right. Salmon was another thought. We considered a vegetarian option with these plus curried lentils. We then thought about them as an appetizer, in the same arena as potato skins. They would be great with sour cream, plain or with chives. Or a dollop of aioli. Or ketchup. Or Sriracha. Topped with scallions. Topped with bacon. And we moved on to brunch thoughts. With a fried egg. Tex Mex with beans and salsa. Especially at leisurely brunch time, consider that these are easy but they do take a bit of time.

The parboiling took 15 to 20 minutes for our 1 1/2- to 2-inch diameter potatoes and cooling for 10 minutes and baking for 20 minutes brings these simple smashed treats to a nearly 1-hour process.

Salt was key to the success here, and we felt strongly about both the first and second saltings. If you skipped the second salting, you could sprinkle with a finishing salt before serving. We used a really nice olive oil, and wondered about an herbed olive oil, and/or the addition of black pepper.

We also wondered about making these with blue potatoes or with sweet potatoes. Or Yukon Gold potatoes. As for the smashing process, we used a small cast iron skillet, and pushed with force, but without speed. We smashed them to a thickness of approximately 1/2 inch. The smashed potatoes in the accompanying photo look thinner than ours, and also more chip-like. Ours looked chunkier and we felt happy to have a nice balance of crispy outside with plenty of soft and creamy inside.

Imagine potato skins without the guilt—well, that’s exactly the treat you are in for with this recipe! (Or, maybe, a tiny bit of guilt if you can’t stop yourself from continuing to taste once they’re done!)

To begin on this delicious journey, I used a 6 1/2-quart Dutch oven, 12 cups of water, and 3 teaspoons of salt. On average, the potatoes were 2 3/4 inches in length and 1 inch in diameter. (In retrospect, I should have used much smaller potatoes, but hindsight is indeed 20/20). Due to the larger size, it took 20 minutes until the potatoes were fork tender. Using a one cup, glass measuring cup, I smashed each potato down to a 1/2 inches in height.

To arrive at the golden brown texture described, my potatoes took an additional 10 minutes added to the 20 minutes provided in the recipe. With only a slight cooling period so as not to burn my fingers, I had to sample a taste—scrumptious! Crispy on the outside, yet fluffy and creamy on the inside. I will definitely be making this one again and the combinations are endless—garlic and butter sauce, chives and sour cream, perhaps Greek yogurt to keep it light with a pepper relish on the side.

This recipe is simple enough but the results are positively gourmet. Give it a try and you will not be disappointed!