Glazed doughnuts. Everybody loves ’em. Even when seemingly everyone is paleo this and gluten-free that, you rarely see someone refuse a glazed doughnut. Especially when they’re homemade, hot from the oil, and taste just like the old-fashioned kind you remember from childhood. This particular recipe turns out doughnuts that aren’t quite as airy as Krispy Kreme doughnuts, but we don’t think that’s a bad thing. The doughnuts are less sweet than most, which means you can drown them in glaze and they still won’t seem cloying. Talk about our kinda doughnut. [Editor’s Note: Seriously. I can’t stop eating these doughnuts. This note may have been typed impatiently and one-handedly while attempting to lick drippy doughnut glaze from fingers and wrist before it plummets to certain disaster onto my laptop.]–Renee Schettler

To make her doughnuts so wildly fluffy, author Lara Ferroni relies on a higher proportion of yeast than one would expect. A neat 3 tablespoons of active dry yeast, to be exact. You could substitute instant yeast—not to be confused with rapid rise yeast—but you’ll need to carefully reduce the amount, explains recipe tester and baking guru Cindi Kruth. Instant yeast is what’s now most readily available in larger packages, AF and Red Star being the most common brands you’ll find at big box stores and supermarkets. At only $3 or $4 a pound, this is by far the cheapest way for home bakers to buy yeast. Kruth made these using 2 1/4 teaspoons instant yeast in place of the 3 tablespoons active dry and she was quite, quite pleased. 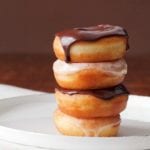 These glazed doughnuts are light, fluffy, and just sweet enough without being cloying. I urge you to use a glaze to make them as gloriously nostalgic as possible.
Prep 30 mins
Cook 30 mins
Resting Time 2 hrs
Total 3 hrs
Breakfast
American
8 to 14 treats
344 kcal
4.94 / 16 votes
Print Recipe 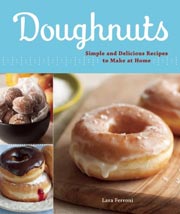