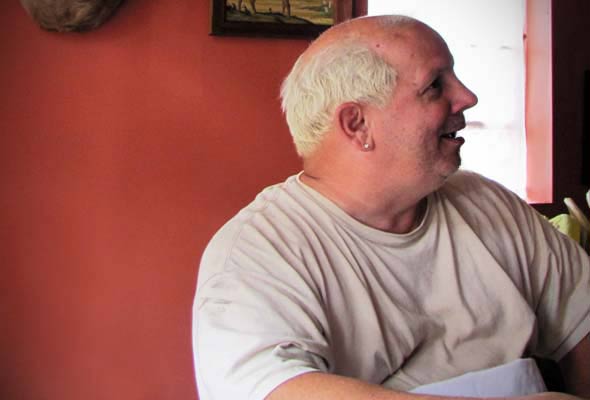 I was raised in the South in a home that never knew a grease-splattered stove.

My parents were displaced New Yorkers. So despite my growing up in a region where everything is fried—tomatoes, bologna, okra, pies, and, at the State Fair of Virginia, even Pepsi—I never learned the fine art of frying–especially how to make fried chicken.

Over the years, this bothered me some, sort of like a loose pot handle that was in need of fixing yet easily ignored. Now, though, my job title is Staff Epicure for Virginia’s largest newspaper. Readers look to me for advice on how to dry-age steaks, open oysters, roast goose. What would they think if they knew of my fear of frying?

When I reached the half-century mark—an occasion for celebration as much as assessment—I figured the time had come to correct this culinary shortcoming. I set my sights on how to make Southern fried chicken and sought professional help from Sydney Meers, a Mississippi native who owns Stove, a quaint and quirky restaurant in Portsmouth, the Virginia town where I was raised. Every neo-Southern meal at this 32-seater comes with a side of Syd, who intermittently cooks behind the tiled half-wall of his open kitchen and repairs to the dining room to sip whiskey, neat, alongside dinner guests.

Syd grew up in Senatobia, Mississippi. He spent many a day hanging out in the restaurant kitchen run by his Grandma Winnie Lee Johnson. There were also many mornings spent tending her half-acre garden, pulling weeds and tamping down leaves between rows, until she’d say, “Let’s go make some lunch.” Then they’d cook. She shared all that she knew—all manner of pies, pork, and fried chicken—and encouraged Syd to do the same. “It’s part of your heritage,” she’d say. “You have to pass it on.”

That notion is now a part of him. Syd is an evangelical cook, spreading the gospel of Southern fare by way of his menu and occasional cooking classes. “To say something is a secret recipe is bullshit,” he once told me.

So when I called, Syd graciously agreed to bring me into the fold of folks who fry—with Grandmother Winnie Lee’s recipe, no less.

Two days later, Syd hands me an apron. We’re standing in front of an eight-burner gas stove in his speck of a kitchen, a honey-colored chopping block before us and pots and pans dangling above us. Metal shelving units that are stacked to the ceiling practically spill their ingredients and equipment, they’re so crammed. Classical music plays from a radio that’s hidden somewhere, maybe on one of those shelves.

Syd inspects the organic, free-range bird that I proffer for my lesson in fried chicken.

“Now, you’ve done real good, Low-raine,” Syd says in a voice seasoned with the South. “This is beautiful.”

Organic is fine and dandy, he explains, but that alone doesn’t deem the bird worthy. It has to also be free-range and raised without hormones, just like the ones that ran around his grandmother’s backyard when he was young, eating bugs and grasses, before Winnie Lee wrung their necks.

Syd makes a cut between the leg and wing with a flick of his knife. He notes that the drumette is slender, not bulging. Proof of the absence of hormones. I may not know how to fry, but I do know how to cut up a chicken. So when Syd flattens the breasts of the bird against the cutting board with his hand, I’m surprised to see that instead of slicing out the backbone, he leaves it attached to one breast.

“Sometimes grandmother would fry it up separate,” he says. “Now most people just cut it out, but that’s the choicest piece. The bone holds so much flavor.” Huh? The things you learn.

Syd has already prepared the brine, a critical element, he says, that imparts flavor and extracts bacteria and toxins. It sits in a stock pot beside us, a simple solution of salty water with a sprinkling of crushed bay leaves and fresh rosemary sprigs from his garden.

I submerge the raw meat in the brine. Syd sets his spattered red kitchen timer for 30 minutes. We slide into his tiny eight-seat bar which he calls The Cougar Lounge. Staring down at us from the wall are mounted game—buffalo, wildebeest, and antelope—that came to him by way of a friend of friend with an IRS problem of which Syd will say no more. He opens a split of champagne and pours us each a glass.

Heady stuff. But sitting in the bar, waiting for the bird to brine, Syd says it all goes back to his grandmother.

As a child, he sat atop sacks of flour in her restaurant watching the line cooks while his mother waited tables. He takes a picture from the wall and hands it to me. It’s a faded snapshot, circa 1955, of the diner-ish place. The sign out front says “Johnson Cafe—Bar B Q Steaks.” A second sign, emblazoned with “air-conditioned,” hangs over the door, a beacon to the hot and weary. A man-sized ice cream cone stands at the entrance.

“Winnie Lee,” says Syd, looking at the picture. “What a girl she was.”

Back in the kitchen, Syd removes a hotel pan from a shelf and dumps three cups of flour and one cup of cornmeal into it. This is the start of his grandmother’s dredge. Syd uses his hands to mix it up, cautioning me to rely on all-purpose flour because cake flour will absorb too much moisture and turn to clumps. His grandmother sifted her flour, but because most come pre-sifted these days there’s no need to do so unless it’s humid. It’s always humid down South.

“We like cornmeal,” he adds, “because of the crunch factor and because it helps hold the flour on the skin.” He says the slightly coarse texture of stone-ground works best.

“Here’s the way you’ve got to do the salt,” Syd says. He sprinkles four pinches into flour and cornmeal and offers me a taste. The salt registers in specks on my tongue.

“Not enough?” I venture a guess.

Syd agrees. He adds two more pinches and mixes it in. I take another taste. A more uniform salt sensation spreads across my palate.

The pepper that Syd sprinkles into the pan was gleaned from the bottom of the pepper grinders in the dining room. Shrewd restaurateurs don’t waste a thing. I place a smidgen of the dredge on my tongue. There’s just a whisper of heat. I’m surprised that Syd says the seasoning is correct given that it’s much less pronounced than the salt. I voice my concern.

“Girl, that’s because pepper holds up better during cooking than the salt,” he says. “The salt will dissolve.”

It’s time. I remove the chicken from the brine, flicking off any herbs that stick to the skin. I catch the faint aroma of rosemary and bay as I roll a drumstick in the dredge.

I can’t recall what kind of oil I used during my past frying foibles, but I know it wasn’t what Syd pulls out of the fridge: a clear plastic tub containing lard that’s slightly off-white and as smooth as buttercream icing. At the bottom of the tub is a glistening brown gelée—drippings from braised pork bellies, a staple on Syd’s dinner menu.

In this kitchen, the contents of that tub are considered gold, all but guaranteeing chicken in the same league as Winnie Lee’s. Settle for nothing less, Syd says. If you don’t have lard, fry up about five pounds of bacon and use the drippings. If all you have is Crisco, don’t fry chicken.

Another nonnegotiable item: Syd’s decades-old cast-iron skillet. Black as a cat, the pan has been wiped clean but never washed, same as Winnie Lee’s. She figured the difference was her skillet, which held all the seasonings of every food she ever cooked in it. No secret. Just the soul of the pan.

Syd ignites a gas burner and adjusts the flame to medium-high. The lard melts into a pool about 1/2 inch deep. When it begins to bubble, the pitch becomes more a gurgle than a sizzle.

“They now have fancy thermometers, but this is the way you fry chicken,” Syd says, noting the sound. “You’ve got to listen.”

The throaty gurgle signals that the lard is hot enough to fry. Using tongs, we quickly nestle the chicken in the skillet, skin side up, careful to handle only the ends of the bones so we don’t mar the coating or inadvertently squeeze out any moisture. The gurgling continues. Soon the meat is rimmed with a frenzy of fine bubbles, which Syd attributes to moisture from the bird. Only when these tiny globules create a goldenrod outline around each piece is it time to turn the chicken.

We take turns carefully turning the fried chicken with tongs. Grease spits and snipes at us, but Syd nixes my plea to use a spatter screen, saying it would trap moisture in the pan and turn the chicken soggy. When the pieces turn a shimmering golden brown, we tong them from the pan and set them on paper towels to rest for a spell. It’s by sight, not sound, that you know when fried chicken is done.

A few long minutes later we sit in the empty bar, white linen napkins in hand, the gorgeous platter of browned chicken before us.

I bite into a thigh, piercing the perfectly-crisped skin. It’s juicy but not greasy. I detect a hint of herb from the brine. Syd selects a breast—the one with the backbone attached—and proclaims it just like Winnie Lee’s. After we finish, he packs up the remaining thigh and breast for me and offers one last morsel of wisdom.

“You can do this, girl,” he says. “The more you fail, the better you get. That’s the fun of cooking.”

I ask if he ever failed at channeling his grandmother’s cooking. He raises an eyebrow. “Everything I’ve tried, I got it right the first time right on the spot,” he says, without hesitation. “I think it might be a gene.”

Lorraine Eaton serves as staff epicure at The Virginian-Pilot newspaper in southeastern Virginia. She is also the recipient of the Leite's Culinaria Scholarship for Narrative Food Writing to the Symposium for Professional Food Writers at The Greenbrier. Although new to the frypan, she’s spent years honing her skills as bread maven, soup nazi, and accomplished mixologist. She blogs about her experiences at hamptonroads.com.