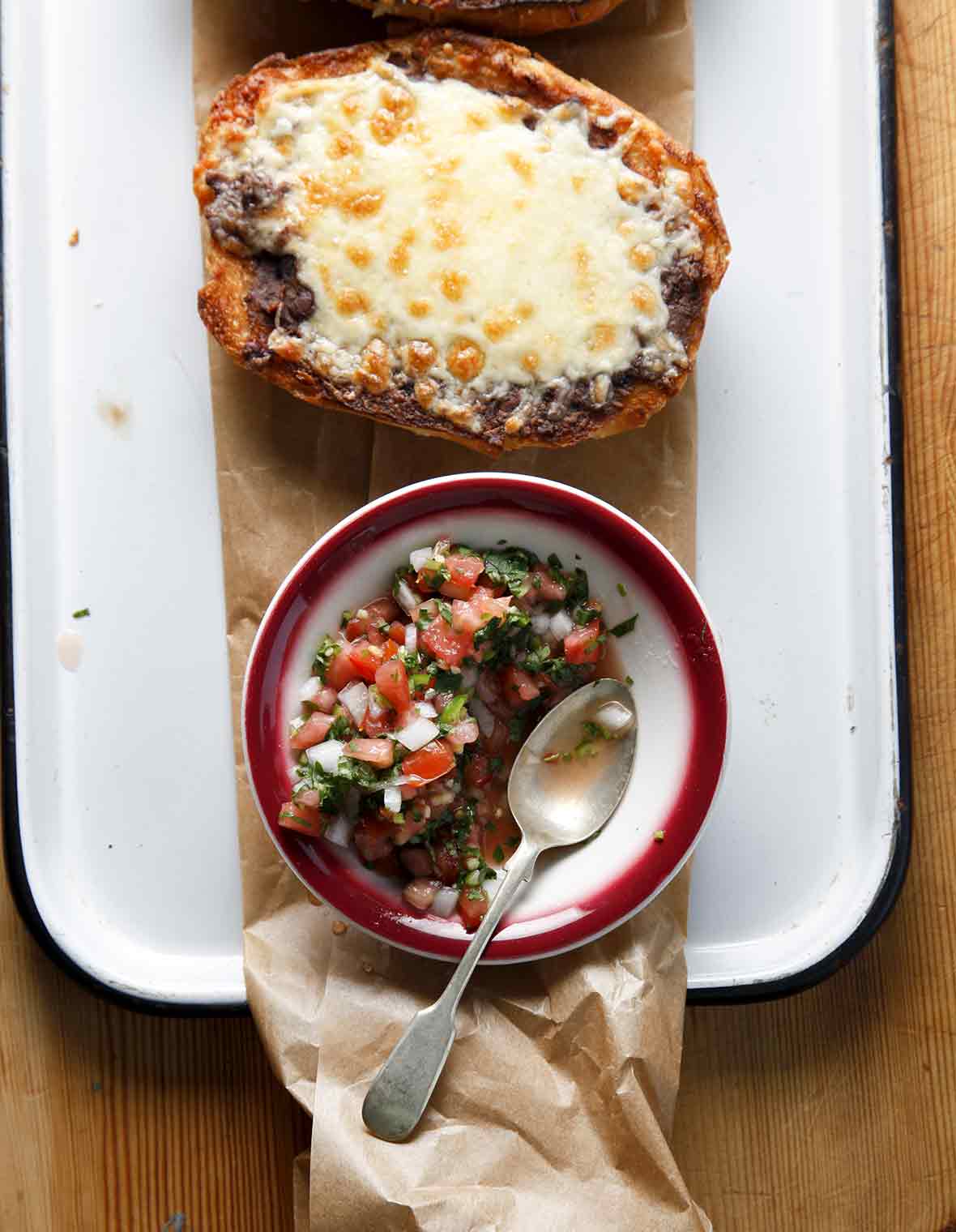 Molletes. They’re the Mexican equivalent of the American grilled cheese. Essentially, it’s stuff that you scrounge from the fridge, and in Mexico, that’s typically beans, cheese, and salsa. And it makes an insanely satiating comfort food fix any time of day. But lest you think this is a no brainer, there’s an art to it, including properly toasting and buttering the bread, adding just the right amount of beans and cheese, and then carefully melting that queso under the broiler until golden and bubbly. And as you probably already surmised, although this recipe makes ample to serve you and a few others, it can easily be scaled down to make just one. You know, for emergencies. Originally published January 16, 2013.–Renee Schettler Rossi

Heat a large skillet over medium heat until it’s nice and hot. Spread the butter over the cut sides of the roll halves. Place the rolls, cut sides down, in the skillet and let them go, untouched, until lightly golden brown and crisp, which ought to take just a minute or so.

Spread a thin layer of beans over the toasted side of each roll. Top with a thin layer of cheese. Place the molletes in the oven just until the cheese has melted and turned golden brown in a few spots, 3 to 5 minutes.

Serve the molletes immediately and pass the Pico de Gallo or salsa on the side.

Who knew half a sandwich could be so satisfying? This takes no more than a few minutes to put together and results in a lovely meal that’s perfect for anyone. Because this recipe was so simple, it left time for me to visit with family and friends and still produce a dish that was unique and comforting. Everyone looked on with anticipation at the bubbly cheese on the half Kaiser roll. The taste proved to offer even more than the first look. The light layer of beans offered the perfect touch of depth and delight at first bite. This recipe works just as written, is super simple and quick, and produces a great meal.

For such a simple sandwich, this was a huge hit! I didn’t expect to like it and was sure my son who doesn’t eat beans wouldn’t like it, but everyone devoured these. My in-laws were visiting and said it reminded them of the beans on toast they used to make when they were first married using baked beans, bacon and cheese, but they loved the Mexican twist. This’ll be a great recipe to have with a bowl of soup on those nights that I end up not having time to cook a full meal.

Living in Chicago, home of Rick Bayless, we’ve a lot of opportunities to eat this sort of sandwich on a regular basis: four varieties are included on his Tortas Frontera restaurant menu, and two of these restaurants are located inside of O’Hare Airport (the travelers among you can try out the real thing if you’re visiting!). On his menu, a mollete is described simply as a warm open-faced sandwich. Made at home with this recipe, it was a pretty special version of a warm open-faced sandwich: simple details, such as buttering and toasting the bread before assembling the sandwich, elevate it above an everyday experience. I felt like I was cheating using a kaiser roll, but it toasted up quite nicely. I used refried pintos and the more traditional option of Chihuahua cheese. And I used salsa, as opposed to pico de gallo. The amount of cheese called for in the recipe created more than a thin layer of cheese atop the beans, but I went ahead and used it all anyway. As a result, I left my sandwiches in the oven a bit longer, to make certain the cheese was nice and melty all the way through. Depending on what else you’re serving with these sandwiches, one might not be enough. I served mine with sliced avocados and easily ate 2 of the sandwiches, meaning this recipe would serve 2, not 4. Additionally, the 1/2 cup of pico de gallo or salsa divided by 4 would’ve meant just a couple of tablespoons per sandwich and we preferred more (that’d depend on the heat of the salsa, I imagine). Ours wasn’t very spicy so we used maybe double the amount of salsa per sandwich. I’m now thinking of making a variety of these for a brunch, serving them alongside a plate of colorful citrus slices, for an enticing change of pace from the usual eggy brunch items.