What gives this grilled Greek chicken its voraciously vibrant flavor is a lemon marinade full of garlic, parsley, oregano, rosemary, thyme, and basil. It brings a Mediterranean mojo to a simple summer supper. This grilled Greek chicken recipe relies on gobs of fresh herbs and a squeeze of vibrant lemon for authenticity and superlativeness. Everyday chicken turns into something truly Mediterranean with an effusive Greek accent. Originally published July 10, 2011.–Renee Schettler Rossi

How To Butterfly A Chicken

The foolproofness of this recipe lies not just in its perky marinade but in a technique known as butterflying. It basically means taking the backbone out, which enables you to flatten the bird which, in turn, ensures it cooks far more evenly on the grill than if it was in it usual form. The name “butterflying” presumably comes from the resemblance of the spread-out hen to a butterfly (well, maybe a little, after a few beers). You’ll also hear this technique referred to as “spatchcocking,” though we won’t delve into the etymology of this term (although we will divulge that we quite like to say it!). Whatever you call this nifty trick, after you try it once, you’re going to want to do it again. And again. And again. A pair of sturdy kitchen shears will make much quicker work of the task for the spatchcock-obsessed than even your trustiest chef’s knife, though the latter comes in handy after you pull the chicken from the grill and need to divvy up the chicken parts. 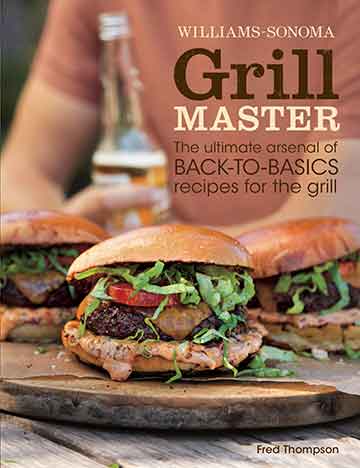 Place the bird, breast side down, on a cutting board. Using kitchen shears or a large knife, cut along one side of the backbone from tail to neck. Pull open the bird, then cut along the other side of the backbone and discard the backbone or save it for stock. Turn the chicken breast side up and open it as flat as possible, as you would a book. Press down firmly on the breast to break the breastbone—you will hear and feel popping—and flatten the chicken.
Season the chicken generously on both sides with salt and pepper. Place the chicken in a large resealable plastic bag so that it lies flat or place it in a baking dish or other large container. Add the marinade and seal the bag, squishing the marinade around the chicken or turning the chicken to coat. Refrigerate for at least 24 hours and up to 48 hours—the longer the more flavorful. Be sure to turn the bag or chicken several times during marinating.
At least 30 minutes before you’re ready to grill, remove the chicken from the refrigerator. Drain and discard the marinade. Pat the chicken dry.
Prepare a charcoal or gas grill for indirect grilling over medium heat. If using charcoal, pile the lit coals on one side of the grill and place a drip pan in the area without coals. If using gas, preheat the burners, then turn off 1 or more of the burners to create a cooler zone. The temperature inside the grill should be 350º to 375ºF (180º to 190ºC). Brush and oil the grill grate.
Place the chicken, skin side down, over direct heat. Cook for 12 to 15 minutes. Turn and continue cooking until an instant-read thermometer inserted into the thickest part of a thigh registers 170ºF (77ºC) or the juices run clear when a thigh joint is pierced with the tip of a sharp knife, usually 15 to 25 minutes more, depending on the size of your chicken. If at any point the chicken begins to burn, move the chicken to the indirect heat area of the grill and give it a few extra minutes.
Transfer the grilled chicken to a cutting board, tent it loosely with aluminum foil, and let it rest for 10 minutes. Cut the chicken into serving pieces and serve at once.
Print Recipe

This grilled Greek chicken was gorgeously browned and perfectly delicious! Add grilled corn on the cob and sliced tomatoes from the garden with feta cheese and dinner is finished.

The instructions were easy to follow about removing the backbone. The Greek marinade gave a subtle, herby, tangy flavor to the chicken. I will marinate it next time for the full 48 hours This recipe will be around for years to come!

I want to kiss Fred Thompson. That’s how good his Greek grilled chicken is.

Really, I’m not kidding. From the first line of his recipe to the last, his instructions are crystal clear and easy to follow. Some may wince a bit at the prospect of cutting out the chicken’s backbone, but it’s a technique that, once mastered—it’s not difficult—pays huge dividends by allowing you to uniformly cook an entire bird in one fell swoop. It makes for a pretty cool platter presentation as well.

The marinade is vibrant and fresh and infuses the bird with the flavors of a Mediterranean sunset. I was lucky enough to have fresh oregano, parsley, rosemary, and thyme from my garden. I had to buy only the basil. The recipe calls for 24 to 48 hours of marinating time and I split the difference, giving my bird about 36 hours in the lovely lemon and herb soak. This amount of time was sufficient to season the meat through to the bone, and sprinkling the meat with salt and pepper prior to marinating meant that no additional seasoning was required at the table.

The bird was perfectly seasoned, tender, juicy, and flavorful right from the grill. The only challenge to cooking this recipe was regulating the heat on my four-burner Weber gas grill. My bird was slightly larger than called for at about 4 1/2 pounds and took just shy of 40 minutes to cook to juicy perfection. Ten minutes of resting time while I put the finishing touches on the balance of our meal was just enough to allow the juices in the flesh to redistribute. The bird looked so beautiful on the cutting board, all splayed out and lightly charred, that I decided to carve it at the table for all to see. The lip smacking was audible. This recipe was loved by all and will certainly become a staple in our summer grilling rotation.

The Greek marinade makes for a delicious and tender chicken. All of the fresh herbs make such an impact on the flavor and the lemon juice adds an extra punch of acidity, rounding out the earthy tones and smokiness from the grill.

I added onions that I also marinated and cooked alongside the chicken for some sweetness and found it to be a great addition to the meal.

The Greek marinade was simple to put together and the ingredients readily available. Removing the backbone of the chicken was also easy. The resulting chicken was moist and had lemony notes, but I was hoping for more robust flavor from the marinade (I did 24 hours, but can see that 48 would be better). I don’t really like cutting up and serving a whole cooked chicken so I will try the marinade on boneless breasts since I think the flavor would be great in a salad.

This grilled Greek chicken is a perfect way to cook chicken on the grill for a delightful dinner. I used a gas grill and found this recipe to be quick, easy, and delicious—one that I will certainly make many times over the summer. The Greek marinade was simple to make and one that could be used on all sorts of grilled meats.

Most folks have at least one tried-and-true recipe for a roasted-style chicken. They think, “Why should I ever try anything new, I already make a good chicken?” This recipe is why.

The marinade was very easy to throw together. We did the suggested 48 hours of marinating. I like using free-range chicken. The smallest one I could find was 5 pounds and it only took a few minutes more than the suggested cooking time for the thigh meat to register 170°F. The result was a very moist, juicy, succulent bird with great yet subtle flavor. Ooh. The skin was also really wonderful. Too good to resist.

This grilled Greek chicken recipe is a wonderfully bright, juicy, and flavorful preparation. Grilling chicken on the bone always creates a richness that cannot be duplicated in boneless skewed pieces. I also love that buying a whole chicken is so much more economical than buying an already separated chicken.

Loved this Greek grilled chicken. The marinade was simple to make and fresh. I bought a 3.8-pound chicken, though after dinner I was wishing I’d had a bigger hen. I think this would be a great dish to make for entertaining as the grilling was simple and the chicken needed very little attention once I got the grill regulated to 350°F. I will make this again soon. We also had a Greek salad with an artichoke and spinach mac and cheese and it was a great dinner.

Wow! The combination of herbs is great, and the chicken was moist and delicious. I’ll definitely be making this again this summer. It took about 45 minutes for the chicken to cook through. It was a little time-consuming to split the chicken, but yielded great results.

I've always wanted to grill a whole chicken and this recipe was a great intro. The 24- to 48-hour marinating time ensures that the chicken stays moist and that all the prep work is done well in advance.

I marinated this chicken for about 36 hours. I used a charcoal grill and added an additional 5 minutes for each side.